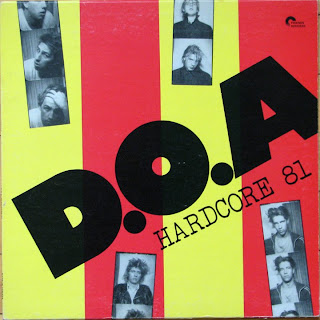 I just got back from an awesome long weekend in Vancouver, BC. I was a groomsman for my buddy Shaun's wedding on Saturday and I flew out early on Thursday to help with last minute wedding preparations, the bachelor party, the rehearsal, etc.
So what does a good supportive groomsman get the groom to do a day before his wedding? Why, go record shopping, of course!
The first stop we hit was Zulu Records where I scored a couple real gems. It is only fitting that when in Vancouver, pick up some D.O.A. 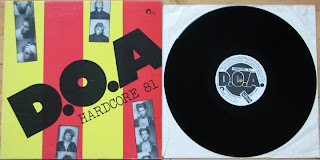 DOA are kind of regarded alongside the Bad Brains and Black Flag as founders of hardcore. Growing up I pretty much saw them as solely a punk band as the same "punks" around town who liked them loved The Sex Pistols, The Exploited and GBH. Calgary was a pretty small place.
As we have all learned from the large number of hardcore history books and documentaries out there, this album is most likely the first reference to "hardcore" as a genre or sub-genre or label. 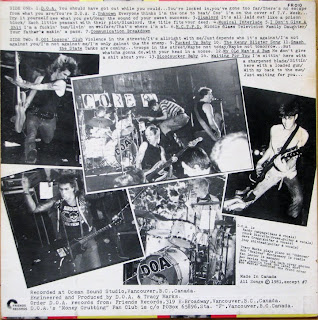 Whatever you want to call it, this record is pretty awesome. DOA also stepped up the speed and aggression of the songs at this time too. Maybe they were hardcore.
Hardcore '81 was first released on the Canadian label, Friends Records. Word is there were only 3000 pressed, all on black vinyl, and is near impossible to find in excellent condition. It seems to be one of those records that ring wear easily. 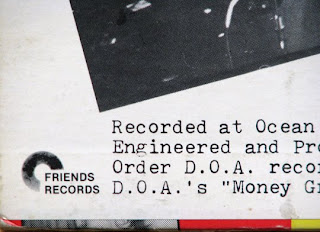 As luck would have it, the record store was selling one in the best shape I have personally seen and for a fair price too. 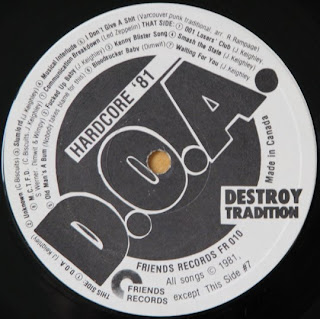 These records used to go for huge money about six years ago and pre-ebay, but the prices have come down quite a bit and you can get one for around $60 to $75.
Not bad for a piece of history.
Posted by Doug W at 9:20 AM