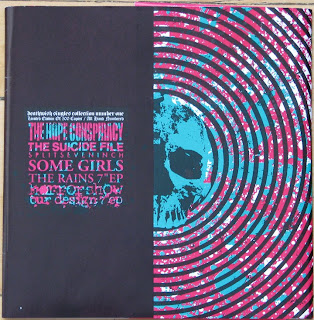 Continuing with my Deathwish collection catch-up, I was super excited to pick this up at the 2008 Sound and Fury fest. Tre at Deathwish sent out an email reminder about the fest and that they would have a table set up with some choice finds. That was an understatement. Flipping through the 7 inches, I found this for $5. I also picked up a few of the Dead Mans Hand splits I posted about earlier.

The Singles Collection Number One was made up of three separate releases, the Horror Show "Our Design", Some Girls "The Rains", and the first Dead Man's Hand split The Hope Conspiracy & The Suicide File 7".

According to the Deathwish discography page, the records were ready to go, but they didn't have covers yet and they wanted to get them out for the summer festival season. Sounds like a plan to me.

500 were pressed. Horror Show was on clear, Some Girls on white and the Hope Con/Suicide File had 438 on grey marble and 62 on black vinyl.
I have the grey marble for the Dead Mans Hard split, if anyone has a black and want to part with it, let me know! 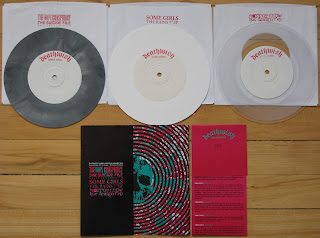 All the white blank labels and inner sleeves were hand stamped and the sets were machine numbered as well. I picked up number 15. Sweet. 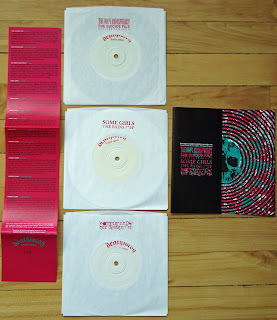 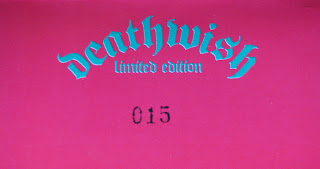 I love the thought and effort put into the whole package, especially the artwork. The cover was of course designed by Jake Bannon. The Deathwish site paints a picture that this release was rushed out and slapped together. That may be, but I think it looks amazing and was done exactly right. Awesome.