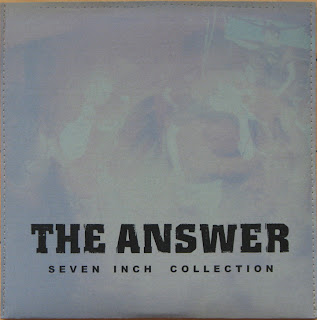 Just when I thought I had at least one band I wouldn't have to collect anymore, Excursion Records goes and releases another Answer record!
This fancy pants looking set was put together by Excursion for this year's Rain Fest.
The label has been around a very long time and has released a lot of cool NW hardcore music. (If Dave ever reads this; Stovebolt discography on vinyl please - Thanks)

There were a total of 100 of these sets made up containing all three of The Answer's 7"s. 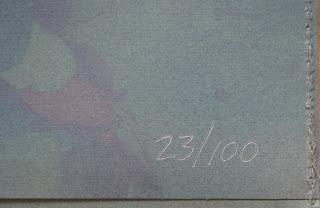 The three records are the self titled 7", the "You Had Your Chance" 7" and the "Getting Even" 7". What is very interesting and cool about this is that all three records were originally released by different labels; Excursion, Anchor and Endwell respectively. 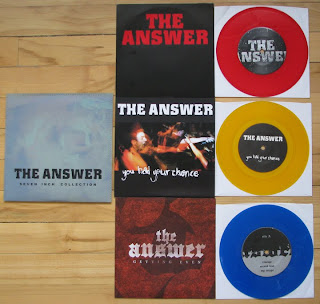 The outer cover is made up of a leather-ish material stitched together at the sides just like my Motorhead "No Remorse" lp. Well, kind of like that. 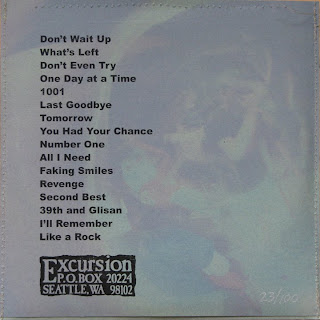 Included is an insert that lays out what records in what colors and numbers were used to put the set together. There are some pretty rare records used to put this together, but you wouldn't know unless you cracked it open. 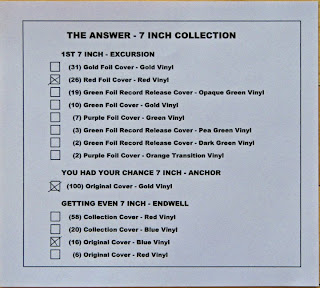 That is where things kind of get interesting. No doubt there would be some people who would keep the set intact and not undo the top stitching that closed the set up. To get access to the records one had to unstitch the top seam.
There wasn't much of a question whether I would leave mine intact as the top seam was pretty much coming apart when I got it. The side seams are stitched a lot heavier and are actually pretty sturdy.

Picking this up was kind of an automatic for me as this is my 22nd The Answer record. Yeah, 22 copies of three records. Maybe just a little excessive...

I really appreciated that the set was available for $10 US ($12 to Canada) plus a very reasonable shipping cost. This has the potential to be an ebay priced collector set right off the hop. Like I said, Excursion is a very cool label.
The last time I checked a very small amount were still available at the Excursion webstore. I don't know for how long though. Check it!
Posted by Doug W at 8:49 AM