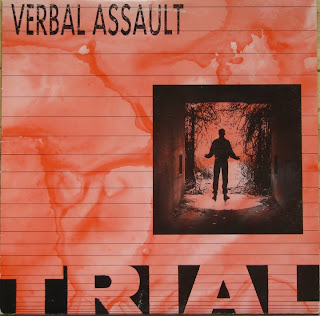 I thought I would do something a little different for my 100th post (!) and talk about a record that's worth for me is based strictly on the love of the music and not the collecting aspect.

Every once in a while I have a crisis of conscious. I question the money I have spent over the years as I stare at a wall of 3000 records that I am rarely able to listen to anymore. Even more than that, I hold records in my hand that I wonder if I will even remotely like in 5, 3 or even 1 year. Hellnation, A.C., and Capitalist Casualties have all gone through the stress test and failed miserably as I ended up selling them off to the local used record store after only 30 seconds on the turntable.
Then there is the one record that brings it all back and makes it all worth it. For me that record is Verbal Assault - Trial. Verbal Assault are not the first, or even the tenth, band most people think of when it comes to late 80's hardcore, but to me they were sheer perfection and "Trial" is my go to record when I question my music listening future.
All it takes is the first song on the album, "Trial" and I am swinging my fists in the air. This band was way ahead of its time. Not many bands sounded like them at the time, but a whole lot did after. Lots of melody, thought provoking lyrics and one hell of a singer. Christopher Jones had the best scream in hardcore! 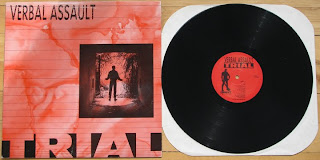 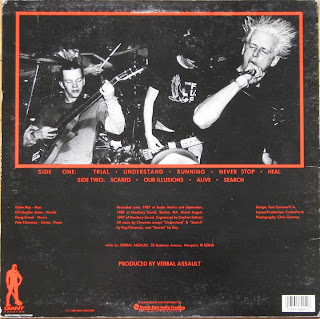 The vinyl is nothing to write home about as far as collecting goes. The first press was released on Giant Records back in 1987. The label is home to some of the less popular albums by Dag Nasty, Uniform Choice and Government Issue.

All the vinyl for this release is on black. 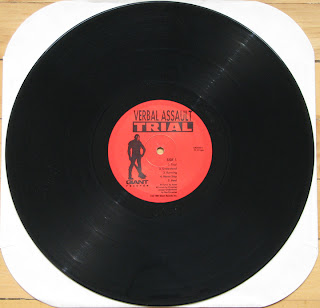 Cool simple lyric sheet with a great illustration that they used as a logo and backdrop. 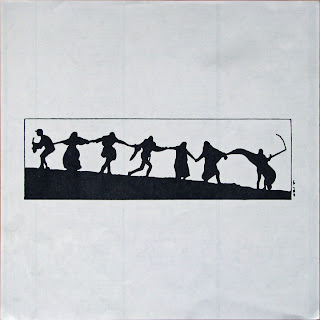 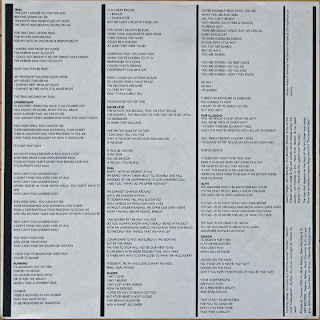 The record was later repressed on Konkurrel Records with a slightly different front cover design.

"ON", "Tiny Giants" and "Exit" don't quite hold up as well over time especially with all the experimental stuff they were doing with reggae and a whole lot of "modern" guitar effects. I guess that is no different than a lot of hardcore bands at the time.
Old school purists look to their first record "Learn" as the definitive VA record based on the time period and who produced it. No doubt, "When I Think" is an amazing song! For my money though, "Trial" is it.
Do me a favor and flip through your collection and pull Trial out for a listen...or go download it I guess. It is well worth it.

"For that day, I stood trial. For my lies and denials. For my lack of discipline and responsibility."
Posted by Doug W at 7:52 AM