Last weekend a couple guys in my band and I were sharing old DRI stories after practice. I don't know how it came up, but everyone seemed to have one and some were downright hilarious. Mike and I had one to share.
True story.
I was playing in a band with Mike sometime in the mid 1990's and we had a show at the University of Calgary. It was just a small local show in one of the lounges at the student center.
We were getting ready to set up and we got word from the guy putting on the show that DRI were there. What the fuck?
I looked out the side window beside the stage and saw the biggest tour bus I had ever seen in my life. It was like the size of the one in the Journey "Faithfully" video.
A buzz went through the room that this "big", slightly irrelevant (Definition era), hardcore punk band would be playing a show everyone had only paid $4 for.
I thought for sure we were going to get bumped from the show as DRI would probably play a long set.
It turned out that they were passing through town and didn't actually want to play. They just wanted to set up a merch table during our show to sell their 5000 different t-shirts, cds, hats, and coffee mugs.
None of the guys from DRI came in to watch, they stayed in their cruise ship sized bus and had FOUR merch guys set up their stuff on three tables.
We didn't sell a god damn thing that night.
Shit like that never really bothered me, and never changed my perception of the band at the time either. As much as I had personally checked out of DRI by that time, I still had the early stuff to enjoy.

Like this record, the Dirty Rotten LP.
We all know the story on this one. DRI released the Dirty Rotten ep on 7" back in 1983. The sound was not so great due to the fact they tried to jam 22 songs on it. The next year they teamed up with MDC's R Radical Records and repressed it on a 12". It was supposed to improve the sound. Yeah, I'm not so sure about that.

First press on the band's own Dirty Rotten Records and R Radical Records. All on black vinyl. 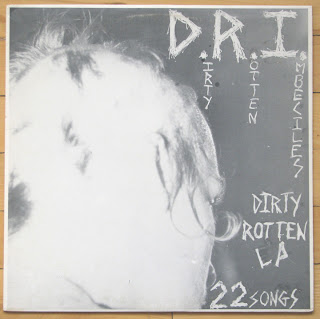 As you can see, they didn't change the art from the 7" much for the new cover. You can faintly see the two lines they blacked out from the "E" in EP to change to LP. They were also pretty faithful to the original back cover of the 7" too, only adding R Radical Records to the back. 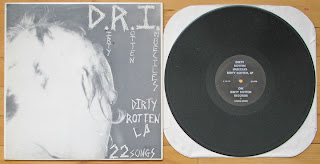 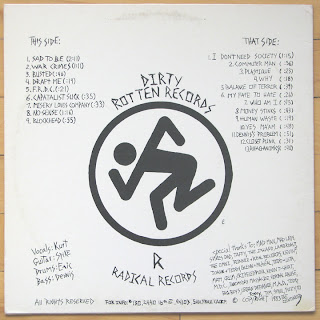 The album also comes with a one sided, black and white lyric sheet. If you have ever heard this album and wanted to sing along, you'll know why a lyric sheet is needed. 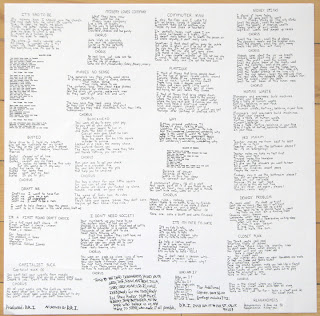 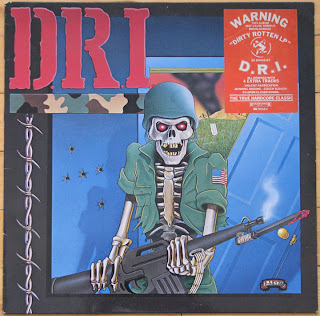 DRI were close to the height of their popularity at the time. The original 7" and 12" were largely unknown to the new crop of metal fans the band had made. Even if these headbangers wanted the Dirty Rotten record, it wasn't like they were going to find it in the mall.

Plus, the new artwork was bad ass. As a teenager, I thought it was amazing. Big fan.

The Roadrunner version was also only released on black vinyl. I am going to say there were thousands pressed, along with cassettes, as I remember seeing them everywhere - including the mall. 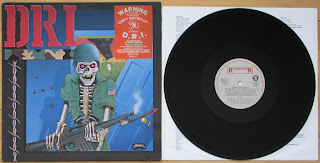 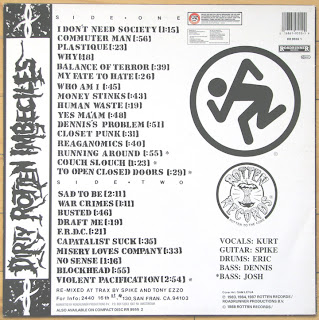 As with most larger labels in the late 80's, they used a glossy two sided printed inner sleeve. I do like that they used the artwork from the Violent Pacification 7" on the one side. 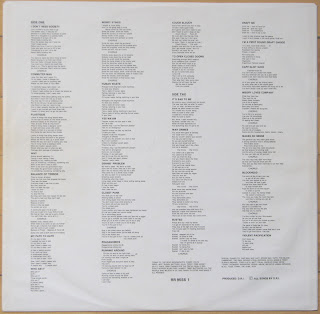 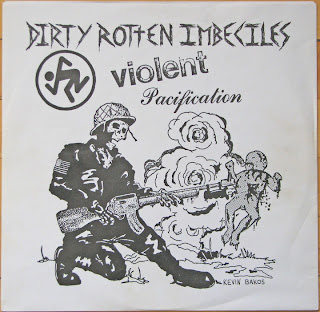 I originally had a hard time getting into this record. The songs were just so spastically fast. The band was so young, sloppy and raw, and the recording so muddy that it took me years to finally appreciate it. Something just clicked.
I think it was around the time I was getting into Cryptic Slaughter. That would make sense. If you can get into "Convicted", you can get into anything.
Posted by Doug W at 8:55 AM