Youth Of Today - We're Not In This Alone 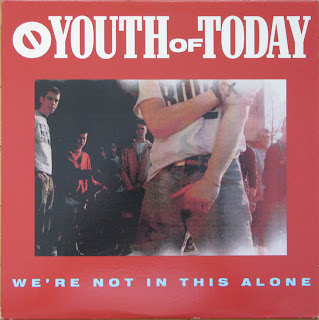 Well, I'm back.
A couple days ago I realized I haven't posted in over a month. My bad. I haven't had much come in that was blog-worthy and I am running out of tricks to pull out of my bag.
I think the record collecting blog world is in pretty good shape. A lot of people are posting what they got in the mail, pressing info and a quick review. It is sharing information with a hardcore collecting community that have common likes and interests. That's pretty awesome.
I always tried to differentiate myself from that formula by pulling records out of my collection I thought people would want to see, either because they are rare or have been forgotten with time. I also wanted to share records that meant something to me as I was growing up and helped shape who I am today.
After two years of We Will Bury You, I might be running out of gas. I don't just want to be a consumer.

Ok. Enough reflective shit. Let's get to it.
One thing I have done over the last few months is obsess over Youth Of Today. Ever since seeing them at Chaos In Tejas, I can't get that band out of my head. I was so pleasantly surprised at how well they played and how the show made me feel. Youth Crew at 42!
Side note: I was convinced they would open with Flame Still Burns. Nope. It was the second song.
Between listening every day and studying Dobek's and Kyle's collections, I got it in my head that however much Youth Of Today vinyl I had, I could do so much better.
So, I hit up my new favorite web store, Discogs. I was able to pick up a ton of Youth of Today German pressings without having to go the ebay route with waiting, sniping, paypal fees, etc. I was able to get everything I ordered delivered to my door within a week. Must be a German efficiency thing.

Thanks to Discogs I was able to finish off my favorite Youth Of Today album, "We're Not In This Alone". I know I'm not alone in thinking it, but I believe top to bottom this album destroys Break Down The Walls.

It was a pretty awesome feeling to finally finish off all of the WNITA pressings and colors after chasing this record down for 22 years.

First Press. Caroline Records. Black vinyl. Millions pressed (not really). Hands down the best album cover ever made. Represents an aesthetic, look and ideal that I still hold today. 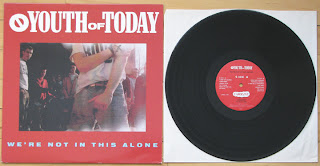 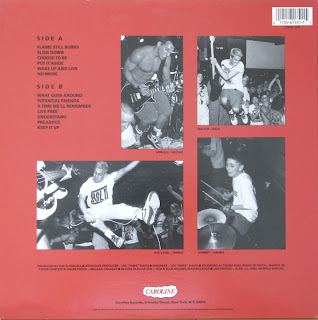 Comes with a large foldout black and white insert/lyric sheet. 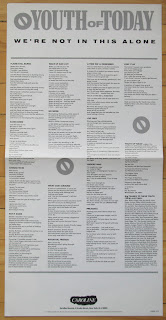 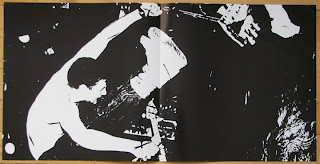 Second Press. Caroline Records. Same cover and insert as the first press. The album had been remixed (and not for the better, IMO) 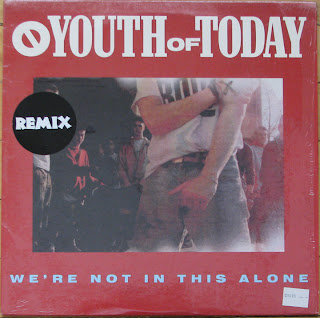 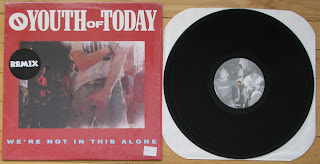 The only way to know if you had a second press was the large remix sticker on the shrink wrap and "Mix #2" on the B side matrix. I got super lucky and bought one with the sticker and shink wrap attached from Dobek. 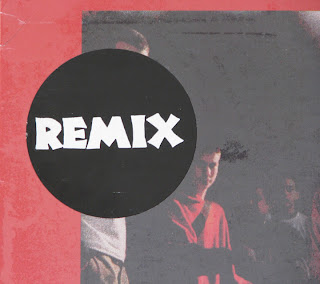 Now on to the European pressings . First up is by We Bite Records. All on black vinyl. No idea how many pressed. 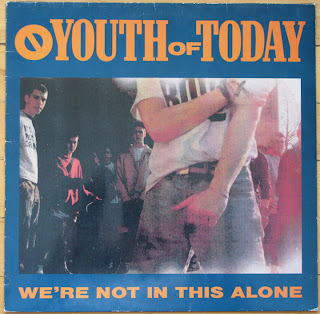 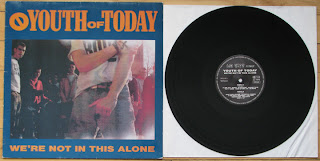 I personally love the color scheme with the blue and orange. The labels were awesome for the We Bite press as well. 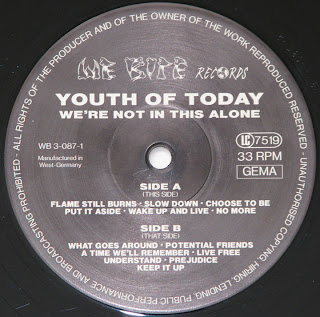 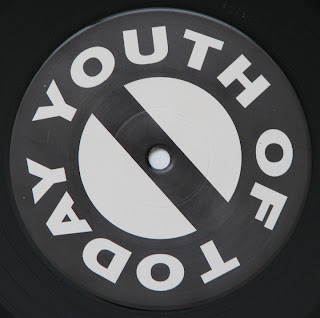 I also think the back cover is better than the Caroline version! 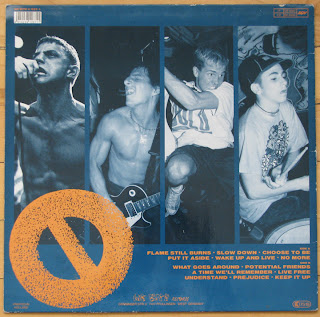 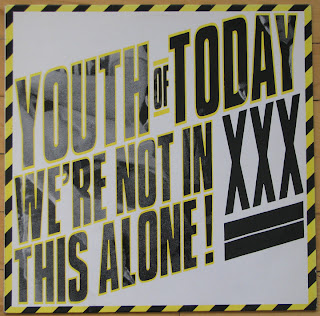 Yellow vinyl. Unknown number pressed. Not a stretch to say less than the black vinyl. 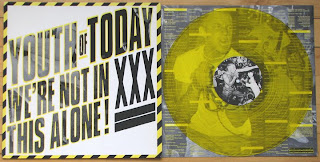 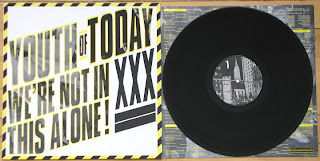 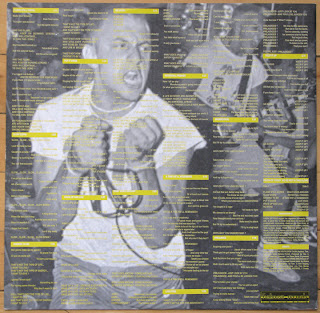 The printed lyrics inner sleeve also had an ad on the reverse side for current and future Funhouse releases. One of them was for Break Down the Walls. I wonder why it wasn't done? Then again I'm not sure why there was a second European pressing in the first place. 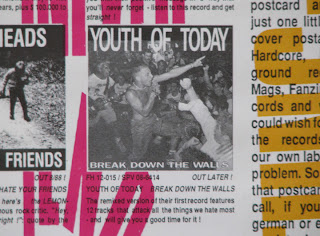 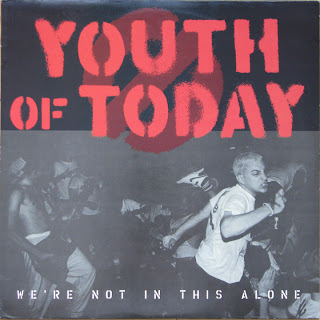 First press Red Vinyl out of 100. All the Youth of Today reissues in 1997 has a rare color pressing and huge black vinyl pressing. This one was half of the BDTW and CCME color pressings. 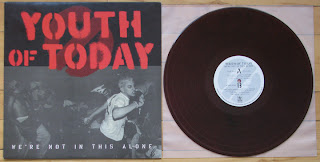 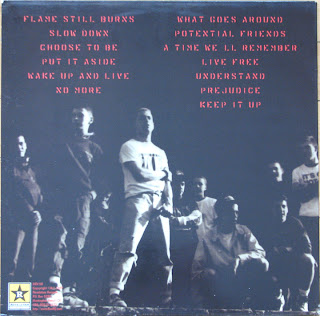 First press black vinyl out of 1518. I think it has been repressed a lot. I can still find it here in town and can't find anything here in town. 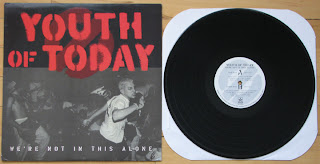 Second press. Purple vinyl out of 112. They tried to match the red from the first pressing to make up for the shortfall of the first press. It definitely ended up different. 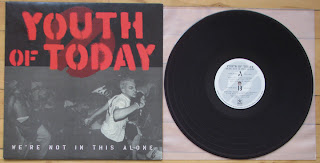 I know with my pictures they all look like black vinyl. You kind of have to see them in person or hold them to the light to see the difference. It is there. 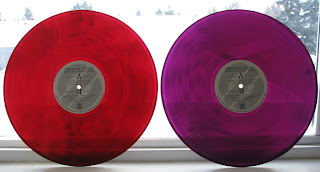 The album came with a two sided black and white glossy insert/lyric sheet. 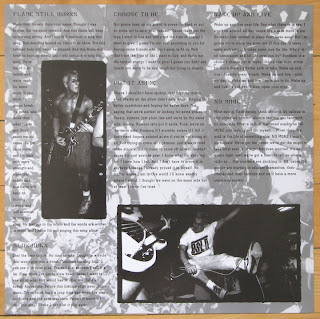 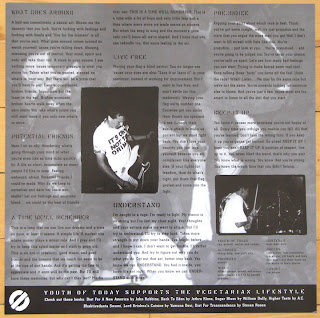 A lot of people hated the Revelation pressing, mainly for the changed cover art, but a whole generation of kids just don't know any different. I'm just cool with the fact that people get to hear what is one of the best hardcore albums of all time and a record that changed my life.
Rant over.
Posted by Doug W at 9:58 AM