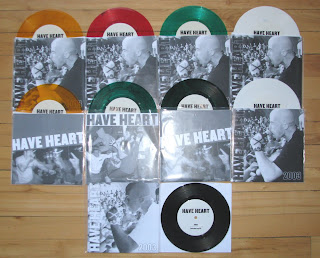 Here we go again, adding on to the single craziest collection I own; the Have Heart Demo 7".
The last time I posted about this record, I had just cherry picked a dude's collection which brought me from 15 to 33 different versions. You can check it out here. 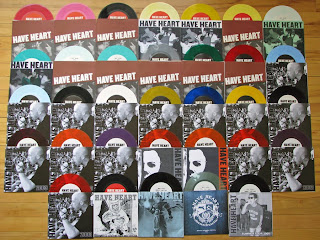 Well last year, another pressing was released courtesy of Jeff Lasich at Bottled Up Records. The old Bottled Up myspace page had always hinted that there would be another pressing due to the fact that there was still demand and that Jeff had a lot of left over covers just collecting dust.
The first two I was able to pick up from the new 7th press was from Revelation. They had two colors available, clear green out of 250 and white out of 500, which was a RevHq webstore exclusive. I immediately picked up one of each.
Clear green/250 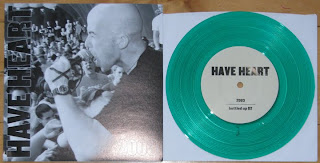 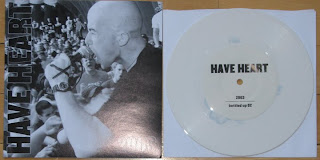 Fast forward a few months and I am surfing the internet, checking out all the record labels I usually follow. I stumble on to the new Bottled Up store to see that there are an additional two colors of the 7" available, clear red out of 150 and Clear gold out of 100. That's two more I order asap.
Clear gold/100 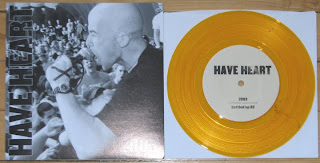 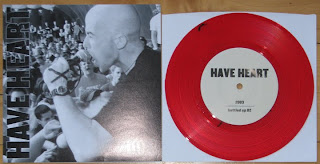 This gets me thinking, if there is one thing with this record it is the color transitions that get counted as separate pressings. These transitional records sometimes end up with a cool different cover or something to set them apart. That's usually enough to keep me interested.
I did a quick check at HYE? to see if other people maybe had some versions I didn't know about. Five seconds later, I'm staring at the 7th press motherload! I messaged Jeff through the React! board and was able to score an additional five copies. 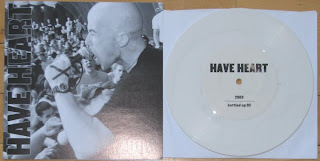 As you can see, these small variants are all some kind of combination of the larger number pressings of white, green, red and gold. Well, except for the black vinyl with the inverse cover.

As luck would have it, or not have it, I'm still missing at least one. Red with black swirl out of 11. Jeff didn't have an extra to part with, so it is off to ebay to hopefully find it some day.
That brings my new total up to 42. 42 copies of the same record. I've said it before and I will say it again, what the fuck is wrong with me?
Oh yeah. I was also sent a full discography to check out as well. According to that list, I'm still 11 copies away from the complete collection, and that doesn't include tests. Kill me now...
Posted by Doug W at 8:08 AM