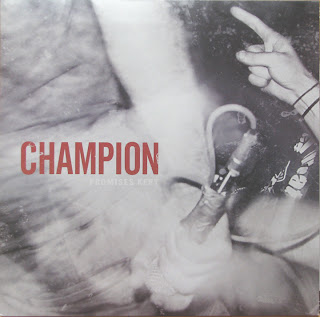 There is a bit of a problem when you become a crazed, obsessed, ravenous fan of something. You lose perspective. I guess that would describe me when it comes to Champion and especially their Promises Kept album.

Promises Kept is my favorite album of all time. It just is. I can't explain it or rationally answer why. I certainly can't explain why it means more to me than Bringin' It Down or Age of Quarrel or any other album people regard as the best. I guess the best way to explain my feelings for the record is through this story.

A few years back I had a job that involved a lot of airplane travel. I mean a lot. Now, I can be a bit of a nervous traveler. I know it is among the safest modes of transportation, but then again, there isn't any room for error. If there is a serious problem, I am probably dying.
For five years, on every single flight, 24 minutes before boarding I would play the entire lp on my ipod. It was my good luck charm. That is just the start. Once on board I would cue up the song "Every Word" on my "On-The-Go" Playlist. If there was ever going to be a problem and my time was up, that would be the the song I was going down with and the last sounds I would ever hear.
"What we said and what it meant, every word is meant to last until the end..." Damn right.
Ok, I might be a bit nuts.

As far as record collecting with this album, just take a look at my banner. I want and need every version, every mix, every color. This time around the record is remixed once again with Kurt Ballou and this time they definitely got it right.  I for one am a simple man and like all of them. The songs matter to me and as I kind of already mentioned, they are perfect.

I have been waiting for this last version for almost two years. A couple summers ago Aram mentioned to me while I was sitting in his car after Shawn's wedding that Bridge Nine would be repressing the album once again with a different, final mix. Well that is some anticipation for a fella. Since that day I have been patiently waiting. A week or so before the album went up, Aram gave me a heads up it was coming. I kept my eye on twitter and facebook and I hate to admit it, but did a bit of the old F5 refresh on B9 as well. I literally think I was the first person to jump on the order when it came up. I hit the webstore, ordered one of everything and checked out.

At least that is what I thought I did. In actuality, I forgot to order the package deal with the huge poster and a copy of Time Slips Away. I figured it would be ok as the description said it would include a copy of the rarest color and I didn't know which of the two available that might be. Since I ordered one of each anyway, I would have it covered.

Well after a couple weeks, the message boards started showing that there was a third color with the bundle package deal. My heart sunk and I figured I was screwed. Hell, I thought these would all sell out in one day. Remember what I said about perspective? Well I thought everyone would be like me and have great taste. Order one of everything immediately. I mean christ, it's Champion! I ordered the bundle package, begged for the third color in the comments section and waited.

Of course things worked out and less than a week later it showed up. Let's get started shall we?

The package deal included a copy of Time Slip Away on clear vinyl and Promises Kept on green vinyl. Bridge Nine hasn't released the pressing numbers, but I assume this is the most rare color. 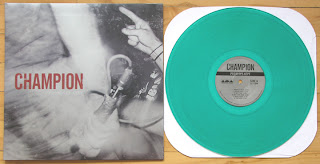 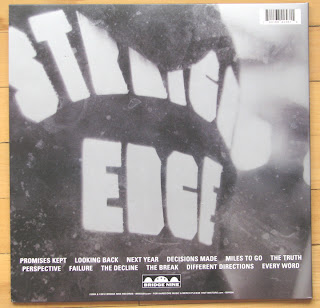 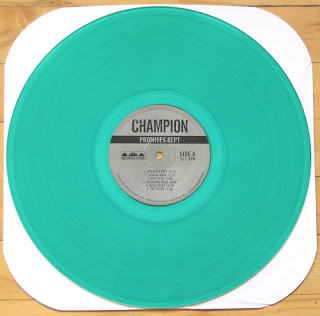 For the first time the album comes in a gatefold sleeve. All the lyrics and insert pictures are on this layout now instead of an insert. 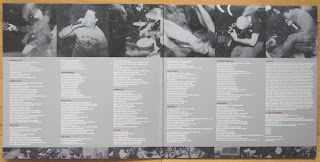 The package deal also came with this monster large poster. It has to be seen to be believed. I am heading to Michaels to get a frame for it for sure. It will sit nicely beside my original Judge Bringin It Down promo poster. 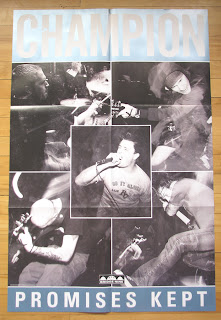 The two other colors available that could ordered on their own were clear and gold. Once again, I have no idea how many of each are pressed, but they look great. 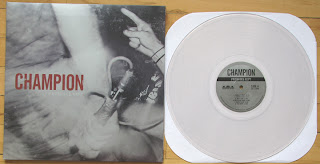 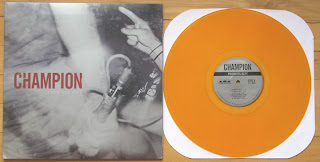 I wouldn't be surprised if there was another color hiding out there for friends or band only. If there is, great. I'm in. That all three of these are still available is great for new fans but a bit of a crime as well. I mean who isn't buying this immediately? Why isn't it sold out?
Posted by Doug W at 3:35 PM