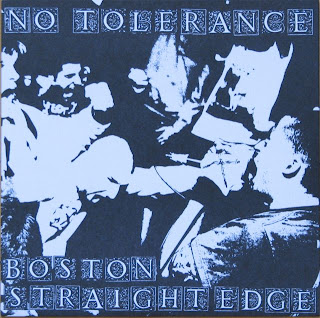 Wow, two posts in a month. That has to be close to a new low for me. I apologize profusely for being lame. In my defence, I haven't received a "post worthy" record in eons. At some point there is just isn't anything to say about yet another color repress or a random record I picked up from RevHq.
I was also making an effort not to spend big bucks on ebay. It seemed to be easier to just write about them on Vinyl Noize than drain my bank account making a play for them. I do have to admit, doing 20-25 posts a month for Vinyl Noize has cut in on my blog time and I will try to do a better job balancing the two.

Of course all of this is precluded by assuming anyone gives a fuck.

Moving on, I was FINALLY able to score one of my major wants from this era of hardcore, the No Tolerance - Boston Straight Edge 7" on gold vinyl. 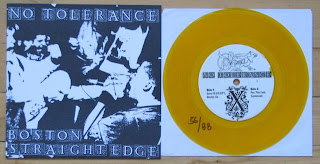 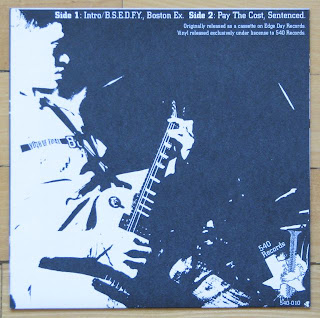 I have had a hell of a time trying to get this record. When I finally saw it up on ebay I decided to go all out and use a sniper program for the first time to win it. I entered a RIDICULOUS final sum for it and hoped for the best. Guess what? I was still out bid. It sold for a number I just couldn't fathom. I pretty much decided at that point that this game was getting too rich for my blood and I should just look forward to $5 preorders.
A few hours later I got a surprise email about a second chance offer on the record and I found myself checking out at paypal in roughly 15 seconds. I'm not sure what happened, but the selling price on the auction I lost was a good $20-30 more than my max bid. In the end I got it for what I was grudgingly willing to pay for it and all is right in the world.

By this time everyone knows the score on No Tolerance. Fast, super aggressive, yet catchy hardcore in the same vein as Step Forward and all the other Boston bands Chris Corry and DFJ are/were in; well except Mind Eraser. This sounds nothing like Mind Eraser.
This recording was originally released as a cassette tape for an Edge Day show. It got the vinyl treatment later on 540 Records out of Texas.

The gold version is obviously the hard one to get and is limited to 88 copies. 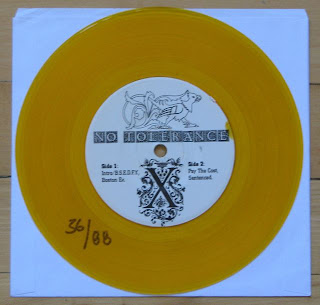 The dust sleeve is hand numbered and other than positioning looks just like the Floorpunch Div 1 Champs layout. That's cool. 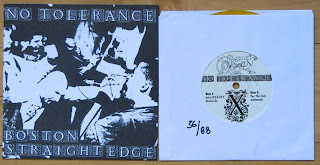 Of course there is also the black vinyl version out of 500. This isn't exactly easy to get either. I remember it was available through Deathwish's distro store for about 15 minutes. I think you can get one now through Discogs for $40 if you were keen. 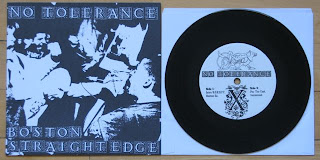 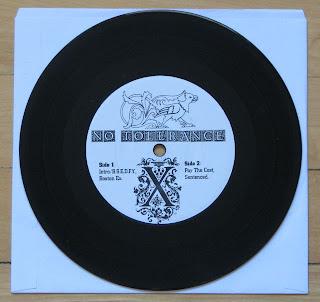 Both versions come with a fold over glossy, two sided, black and white lyric sheet. 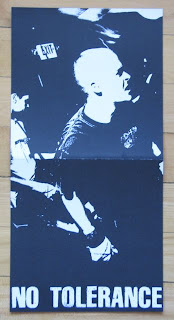 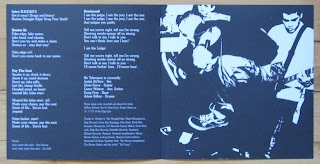 Now I just have to track down a No Remorse, No Tolerance on blue vinyl. Good times ahead.
Posted by Doug W at 8:13 AM