Back in the mid 1980's, I bought a magazine that professed to be the definitive encyclopedia of Thrash Metal bands. The thing is, there were way more than thrash bands. In addition, there were lots of crossover bands and some straight up hardcore bands like Youth of Today and Black Flag. It was so cool to see all these bands I liked in one place.
I was enthralled by the full page ads, one of which was for Combat Records. On page 13 was an ad for the reissue of Agnostic Front "Victim In Pain" and also their third lp "Liberty and Justice For..."
I had heard Agnostic Front a few times but to be truthful I was more intrigued with what I read about them. The Lower East Side, NYHC, Stigma, CBGB's, squats, the works. Nothing could be further from life in Calgary, Alberta.
Of course I bought Victim In Pain as soon as I could - on cassette.

It would be years later that I would start hunting down the vinyl. At the top of my list was the original version on Ratcage. 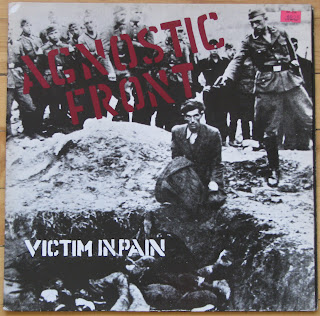 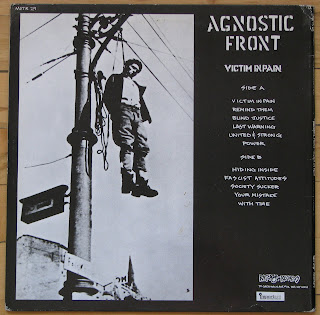 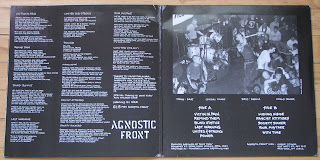 The shocking imagery and relative difficulty finding this before the internet days made this a taboo record. Let's just say I wasn't showing it off to mom when I got it through a penpal deal.
This is the second press as it has the added Important Distribution label on the back cover.
There are a lot of represses of this but you can tell the original by the red lettering on the front cover.

That is some serious dead wax! More than half the side is blank. 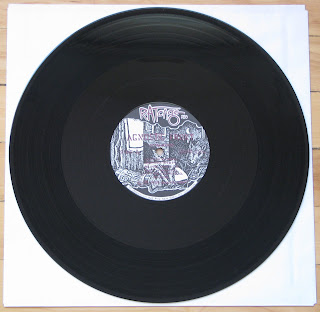 For years I ignored the Combat repress. I felt it was second tier at best to the original. Over time though, I have found it near impossible to find one in good shape. AF fans must really beat the shit out of their records. Either the vinyl is scratched all to hell or you have huge corner creases (like mine). 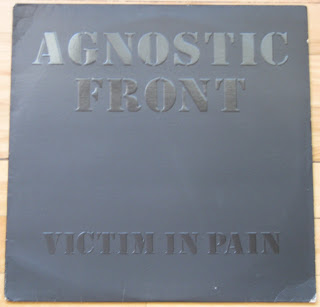 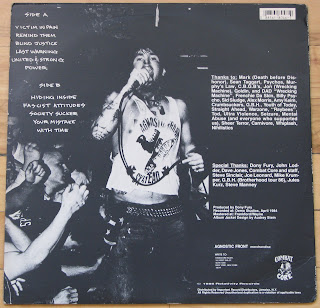 But the main claim of infamy for this record is the ringwear. I am nominating it into the ringwear hall of fame alongside Ozzy Osbourne/Randy Rhodes - Tribute. The black cover doesn't help but every other copy I have seen has a huge ring on it.

Besides the killer embossed cover, the reissue also came with a sticker on the shrinkwrap telling you what the record was. Like this was going to be a problem at the mall with dad buying it for his daughter or something. 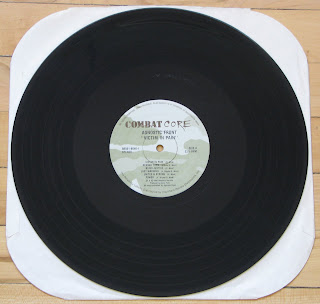 What is kind of crazy is that the reissue was released 2 years after the original. Two years! It hardly makes it a cheap money grab. Now 23 years later, I would say having either of them is a good score.
Oh yeah, the music rules too. But you knew that.
Posted by Doug W at 3:24 PM