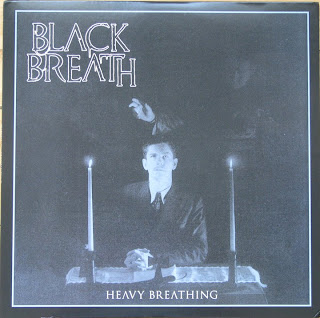 Black Breath's "Heavy Breathing" album is my favorite record of the year so far. Of course with the weather finally turning nice here in Canada, I'm sure my mood will change to reflect the nice weather and summer time vibe. Perhaps some Lady Gaga or Justin Beiber? Probably the new Ceremony album. In the meantime, I am all about the Black Breath.

As far the vinyl, it was released on exclusive clear blue vinyl for Southern Lord mail order customers. 494 pressed. It's pretty surprising that it is sold out already. There should be black vinyl still out there I am sure. I also heard there is clear available in Europe through Southern. I'm going to have to take a pass on that one. Shipping costs from Europe are more than the record these days. 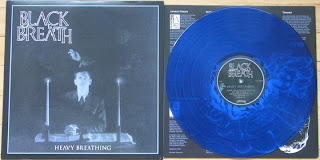 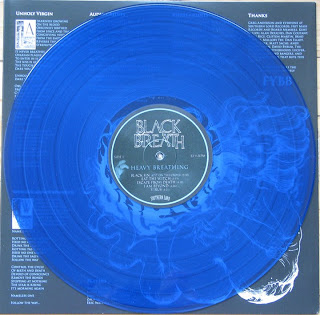 This record is so hard to categorize. If I try, someone will think I am way off base.
Well, what can I say? There is plenty of that Gothenberg/Swedish death metal sound with the straight forward intensity and speed of D beat hardcore. Works for me.
This album is also way more metal than their first release, "Razor to Oblivion", which had more of a rock and roll feel to it, kind of like Doomriders, but without sounding like Doomriders. 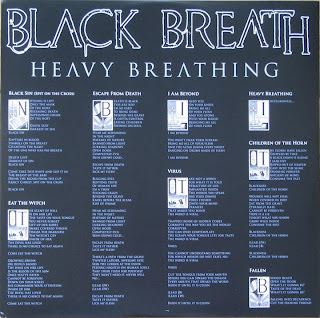 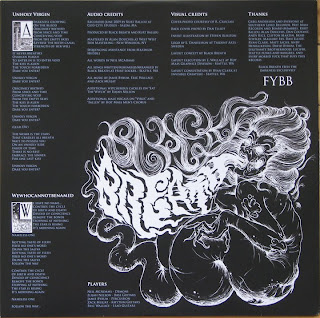 Everyone I know who listens to heavy music, from grind to death metal, from punk to hardcore likes this record. It is getting a lot of love from the metal community with it being released on Southern Lord too.
It is nice to see Southern Lord diversify from corpse paint black metal and SUNN O))) records. Not that there is anything wrong with that. I love me some Sunn O))).
Posted by Doug W at 6:02 PM