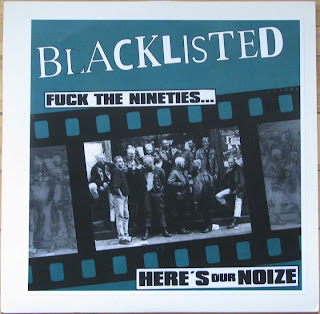 Not too much to say about this other than this is now my 8th different version of this record and I'm pretty sure the rarest.
There were a grand total of 30 of these made specifically for the 2009 Chicago Burning Fight show.
The "Fuck the Nineties...Here's Our Noize" cover is a rip off of the mid 90's German Oi band Oxymoron and their album of roughly the same name.
From all accounts of those who were at the show, the merch area was a tiny, jam packed madhouse where no one could move let alone buy anything. There were people at the show who had no idea these were available and they were gone before anyone knew. (hey Juan?)
The vinyl used for this release was the clear blue second press of 2000. No real shortage of that out there and they used the same for the 2008 Sound and Fury press. 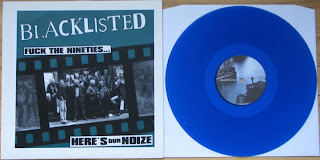 In the end, 30 total records is a crazy small number for such a high profile show and popular band. I feel lucky to have one at all. Thank you ebay!
Posted by Doug W at 3:22 PM