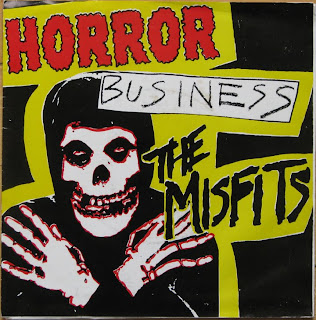 Continuing on with my insane Misfits buying spree, the next record to arrive in the mail was the Horror Business 7".
Maybe it's because of the pressing numbers, the age of the record or that it is on color vinyl, but damn this sucker was expensive. I guess it makes sense, the older you get in the Misfits catalog - the higher the prices. Boy, I can't wait to see how much I am going to end up spending on a Bullet or Cough/Cool 7"! Good times!
According to Misfits Central and a couple other Misfits reference websites, the only pressing of this record your punk asses are ever going to see is 2000 on clear yellow vinyl. 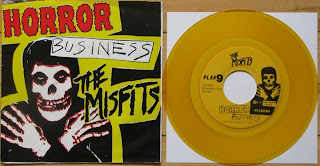 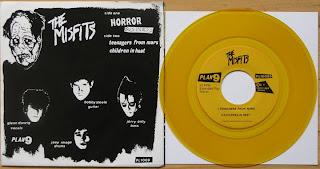 25 black vinyl copies were pressed quickly for an upcoming Misfits show by Glenn without sleeves. They were mainly distributed to promoters to get some shows and were sent out in screened envelopes. Whatever the deal is, I'm not going near it. The idea of having one or even seeing one in my lifetime is preposterous. Let's move on.

As far as the regular yellow vinyl goes, the matrix numbers for Side A are: PL 1009 A 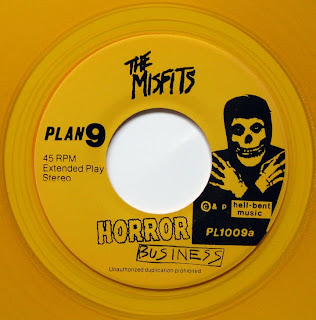 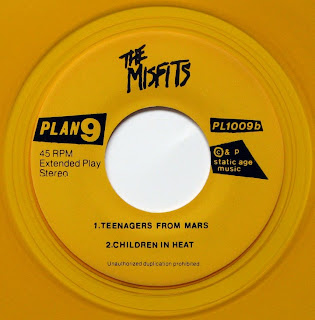 Of course there are black and also red vinyl bootlegs out there but those will be pretty easy to spot.The bootlegged item you have to look out for is the insert.
If the line of text on the insert "(note esp. Teenagers From Mars)" has a capital N on the word note, it is a bootleg. Devious mf'ers! 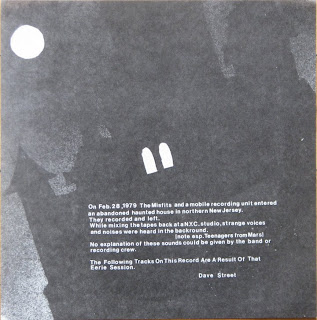 I guess there is also some way to tell a bootleg insert by the contrast of the picture and the type of paper, but if you have never seen one in the first place, how the hell are you supposed to tell?
Oh and there is also the issue of the alternate rejected back cover picture, but you can read about that from better collector websites than this one. I'm just glad this thing arrived in one piece and is in such great shape! 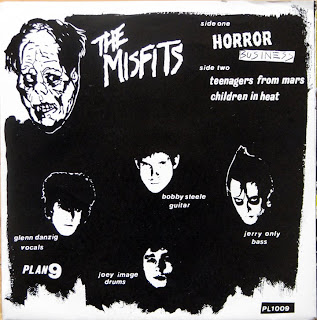