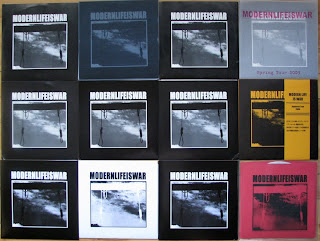 It's not very often in this game that you can say, "Done". Between tour presses, weekend show stamped covers, fest covers, friends presses, multiple colors, variants, error presses and test presses (which I don't collect thank god) it is near impossible to say you have them all unless you:
a. are in the band
b. are friends with the band
c. run the label

The average guy doesn't stand a chance!
That is why I am pretty happy (for the moment) to say I have finally finished my Modern Life Is War s/t 7" collection. I have touched on individual versions in the past, but this is the first time I have all of them together thanks to a recent purchase.

No band has got so much mileage out of a single release. Between two labels and countless represses, this record has stayed alive for damn near a decade.

Here is run down of each of the 12 records in release order. I have added the insert in each picture when there was one as it is a major factor in determining different presses. Thanks to the Lifeline discography page for the pressing numbers. Good times!

1st press. Clear vinyl out of 500 on Modern Life Is War Records. Basically they self released it. I'm not sure why they changed the insert after this because I think it rules. 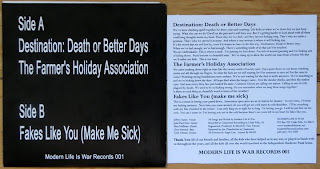 Friends press out of 50 on various colors. Mainly it's a mix that ends up brown. No insert but a message on the back flap of the cover thanking friends for their support. 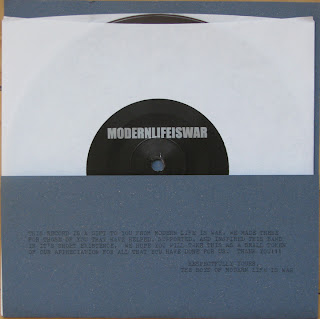 3rd press. Red vinyl out of 150 for the 2003 Spring tour. This is also the first press for Lifeline Records who would release every press from now on. Color insert and the first of many changes. The outer cover is a wrap around vellum/parchment type deal over top of the regular cover.

3rd press. White vinyl out of 1150 on Lifeline Records. This 3rd press is different from the subsequent white vinyl releases due to the posed band photo insert.

4th press. Green vinyl out of 325 pressed for their European tour. Dust sleeves are stamped and numbered. This is also the introduction of the most common insert picture that would be used from this point on. The insert is green tinted to go along with the colored vinyl. 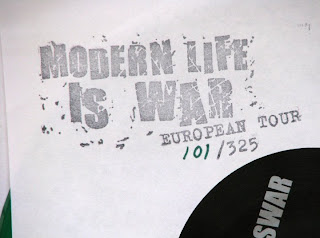 5th press. Black vinyl out of 600. This pressing came with Lifeline Records stamped dust sleeves. Apparently it was a pressing plant error, but I think it looks bad ass.

5th press. Clear yellow vinyl out of 150 for their Japanese tour. I've said it before, I'll say it again - OBI strips are awesome.

6th press. White vinyl out of 3125 and counting. This version is still in press and makes up 99% of all the MLIW 7"s you will see out there. I like that Joe from Lifeline has kept this available and as we have seen, there is still a demand for the music.

Lottery press. 50 pressed on white with black streaks. I posted on this record before. I have never won anything in my life, so this was especially satisfying to get. The outer sleeve is a contrast of the regular black cover. Dig it.

Final Tour Press. Blue vinyl out of 200. This was bundled with the final tour press of the Midnight In America lp. This was not available separately.

9th press? Grey vinyl (looks a lot like the white w/ black streaks lottery press) out of 100. Joe had a box of 100 of these that he put together with red covers, insert and a clear transparency to wrap over top. Each are hand numbered on red inserts. 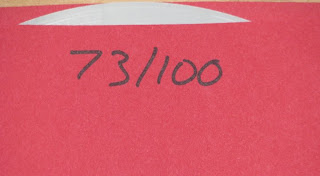 I am not naive enough to think this is the end of collecting this record. At least for now I can say, "Done".
Posted by Doug W at 6:59 AM