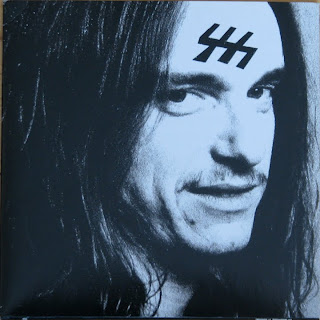 I am literally ashamed of myself for missing out on SSS for all these years. I mean hell, I love hardcore, skate rock, metal, crossover and thrash. This UK band has all of those elements nailed down tight, yet for years - I missed the boat.
SSS, or Short Sharp Shock, play super catchy, mosh and groove orientated thrash, yet on this record I would still call them a hardcore band. Most of their songs don't last over a minute or two and the singer sounds just like Billy Milano from S.O.D or the dude from Wargasm. I literally can't tell where the metal ends or hardcore begins so I am just going to go with calling them crossover.
I mean, what other band can start out on the hardcore label Dead & Gone and by the next record be on Earache?
Once I finally tracked down some of their music online, it didn't take long for me to figure out that their self titled first 7" is their best. Generally just called "Burton" for really obvious reasons, this record is perfect.

The Burton 7" was a split release on Thrashgig and Dead & Gone Records. The first press was 100 on clear vinyl and 400 on black. There was also a record release package out of 50 that used the clear vinyl.
A second press of 500 on black was also pressed and that is the one I got here. 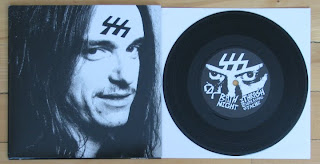 The big selling point of the record is their masterpiece, seven minute opus called "Black Night, White Light" which recounts the night Metallica's bassist Cliff Burton lost his life in a tour bus accident in Sweden. The song itself pays homage to the Metallica song, "To Live Is To Die" with a lot of guitar solos, soft instrumental passages, and even a spoken interlude like in the Metallica song. It really is cool and funny too. 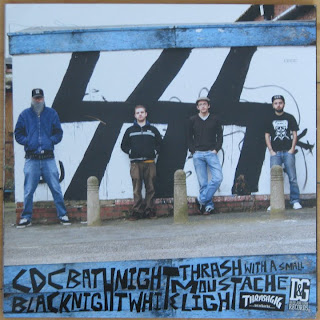 The record also comes with a huge two sided lyric sheet/insert. The one side shows our bass god Cliff Burton again with lyrics, credits and thank yous. 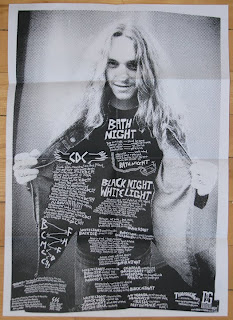 The flip side has the lyrics for their amazing song, "Thrash With A Small Mustache" and plenty of mustachioed men like Charles Manson, Adolf Hitler, Charlie Chaplin and Burt Reynolds. Sweet. 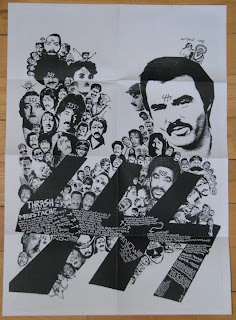 There is also a second insert that has a comic strip starring the band called Adventures In Thrash With SSS. These guys have a sense of humor, that's for sure. 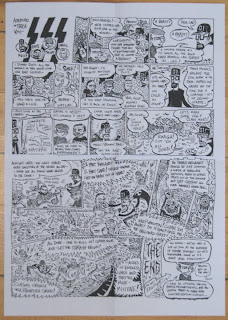 I am now on a mission to track down the rest of the versions of this record, I have some catching up to do.
Posted by Doug W at 9:06 AM