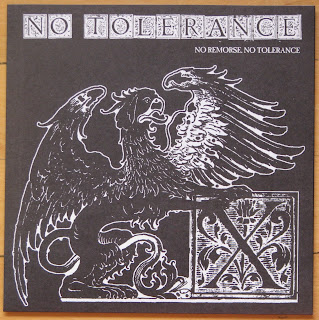 This post is seven months in the making as I finally received my huge Youngblood order I made back in December. The Youngblood Records preorder contained new records from Police and Thieves, Give, Face Reality and No Tolerance. At the same time, a few leftover 2011 Showcase packages were made available for order as well. I immediately jumped on both just to get all the versions of this one record, the No Tolerance - No Remorse, No Tolerance 7".

We all know how crazy fast the Boston Straight Edge 7" sold out a couple years ago. I scrambled to get just a black vinyl copy of that one and I am still looking for the gold vinyl. So when the opportunity arose to score all of these in one shot, I took it.

Well, with the inevitable manufacturing delays of some of the other records in the package, we were left waiting... and waiting. Months past and I even started emailing Marcus and Mike to see if they had heard anything about when these might be coming. Finally, Mike had received his order and I immediately jumped all over Sean Youngblood asking him where mine was. I asked nicely, but I am sure I was still a pain in the ass. A couple months later and here we are, up to my neck in records and posters. It's all good.

No Tolerance is one of those Boston buzz bands like The Rival Mob, Boston Strangler or Step Forward that through word of mouth and message board hype end up "THE" band of the moment. T-shirts and vinyl sell out immediately and everyone is left scrambling. Luckily, with this Youngblood order, everyone was able to get their No Tolerance fix. Well, for about an hour until it sold out.

First up is the Youngblood Showcase 2011 version. This comes on black vinyl with blank red labels. There were only 85 of these available. The cover is a fold over screened print with a large lyric sheet on red paper. Obviously the covers and vinyl weren't ready yet at the time of the show. How it didn't sell out at the show is a mystery. 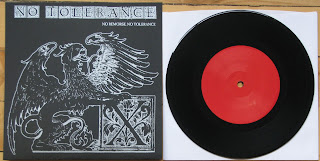 Next up are the versions that came as part of the preorder. First up is gold vinyl out of 128. 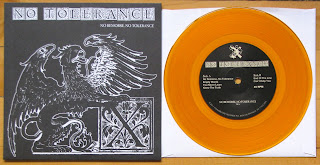 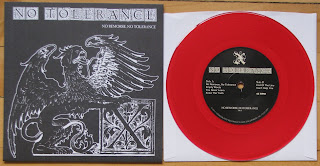 Finally there is good old black vinyl. I assume this is the most available color. No idea how many were pressed, but there couldn't have been that many as it is sold out too. 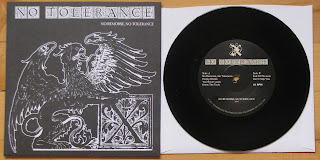 These regular versions all come with a glossy insert. 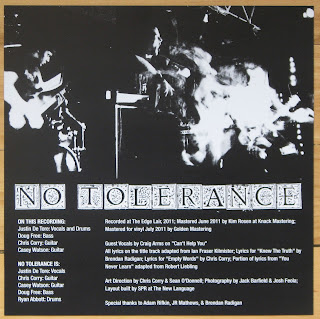 Musically this is exactly what you would expect if you have the first seven inch. Fast, agressive, pissed off hardcore with plenty of old school Boston straight edge influence. The usual cast of characters are involved so you know this isn't just hype. These dudes can play. This is easily my mid-year contender for record of the year. Hopefully everyone who wanted one got one. Ebay can be a bitch.
Posted by Doug W at 9:17 AM