Corrosion of Conformity - Your Tomorrow 7" 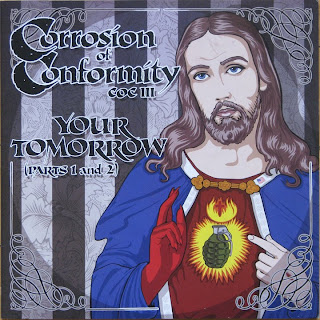 You know, I really wanted to like this. A lot.
When news broke that C.O.C. was getting back together with the "Animosity" lineup after what felt like decades of southern fried rock thanks to "new" guitarist and singer Pepper Keenan, I was excited. This truly turned into two different bands thanks to one lineup change that just moved them into a direction that I wasn't going along for the ride with.

C.O.C. were a big favorite of mine back in the late 80's. I still pull out Eye for an Eye, Animosity, and Technocracy on a regular basis.
So when the buzz started on the message boards that this was going to be the old C.O.C. three piece with Mike Dean singing and Reed Mullin back on drums, I thought it was going to sound, well - like this. 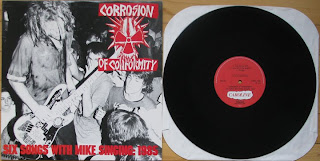 No such luck. There is just not the snarl or fire I was hoping for. It is heavy, but in a grooving jam kind of way. This is 25 years later. I should have known, but you always hope. You know?

As far as the vinyl goes, it looks pretty darn awesome. Southern Lord went all out on this and it is pressed on 180 gram vinyl. Very heavy for a 7"! 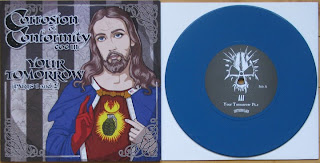 If you ordered from Southern Lord, you get their exclusive webstore color, red. I saved $10 and went through RevHq and got blue. Good enough. 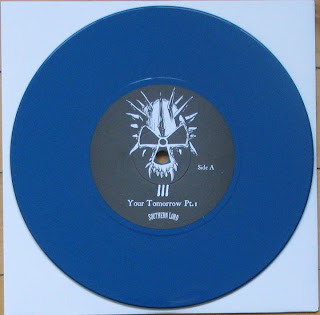