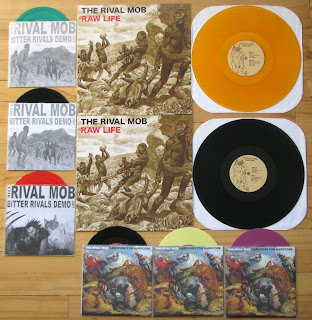 Every once in a while I miss the boat completely on a band. What can I say, it happens.
You just can't follow every band on myspace music, you can't read every review, and you can't collect every record that is out there. Money, time, and attention are in short supply sometimes.
All that said, it bugs the hell out of me that I missed out on The Rival Mob from the beginning. They have evolved over the last couple years to become THE hardcore band. Big buzz, lots of hype and print - and all of it completely warranted.
This band is simply awesome. The Bitter Rivals demo 7", Raw Life 12" and HC4HC 7" are all fantastic records. Plenty of attitude, great groove, mosh parts, breakdowns, speed and great riffs. You know - hardcore!
I realized just how late my late pass was when I pre-ordered their latest record from Six Feet Under a few of weeks after it went up. I went for the 3 pack, hoping to get all three colors. Well, this is what I got:

Three of the most common color. Fuck.
Well, that did it. What is any self respecting collector to do about this obvious problem? Why, hit up the B9 board and buy an insta-collection of course! One big package in the mail later, and I am pretty much caught up. I couldn't be happier or more ashamed.

First up, the Bitter Rivals Demo 7" put out on Triple B Records.
First Press. Green vinyl out of 110. 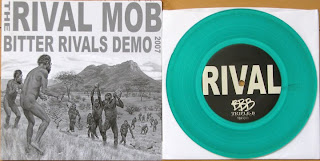 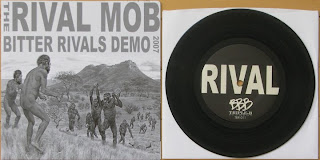 Second press. Orange vinyl out of 200. Pretty easy to spot with the different cover and blank labels. 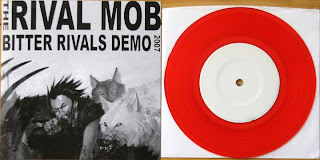 Next up, the Raw Life 12" that was released on Lockin' Out Records. This album is so good and my favorite of the three. Eight perfect songs.

The limited press is Clear Gold out of 300. 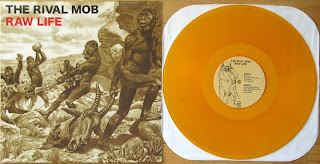 The standard press is black out of 700. 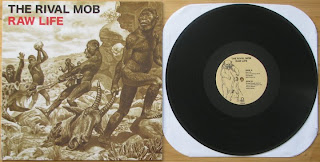 Lastly, the previously mentioned Hardcore For Hardcore 7" that was released on Six Feet Under.
Black vinyl out of 150. 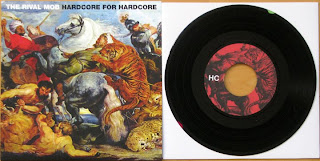 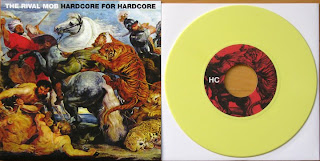 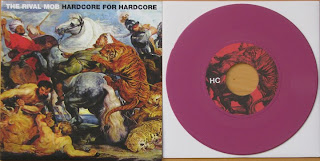 Of course with any hot band, all of these are long sold out. There are of course a few showcase and fest covers out there that I will need to track down, but at least I have the core vinyl now. I just hope I don't miss out on the next big band as badly as I did with this one.
Posted by Doug W at 8:48 AM