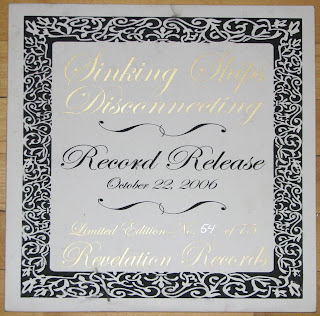 Things have been pretty quiet for me on the ebay front this summer . For whatever reason, I have decided that I am not going to try so hard to outbid people anymore. For six solid years I rarely lost an auction as I would be the idiot sitting in front of the computer at 3:30 AM waiting to make a last second bid at an inflated price I knew couldn't lose.
I guess my "passion" for overpaying has waned quite a bit these days as now I simply put a bid in that I am willing to pay and walk the fuck away. If I win, great, but if I don't - whatever. Plus, I'm kind of at the point where my want list consists of records that are either insanely rare, popular and expensive to buy or are ones that I couldn't be bothered to bid on because shipping would cost as much as the damn vinyl.
I guess that is why I was pretty happy to finally track down the record release version of the Sinking Ships - Disconnecting album. When this album first popped up on my radar it was an easy $80 - $100 seller on ebay. I tried hitting up some of my west coast contacts to see if I could score one and they were more than willing to sell theirs to me, for $100.
Yeah, that pretty much put me off the record and I let it drop to the bottom of my want list for a few years. When I stumbled on it last month, I put in a low ball under $50 bid three days before it was over and forgot about it. Surprise, surprise I won the thing.

Nothing to really write home about with this once you get it in your hands. Half clear, half green vinyl with grey splatter. No labels. I know this is one of Marcus's favorite color records ever. He just raves about the combination of colours and overall aesthetic of how it matches the artwork. Isn't that right my man? ;) 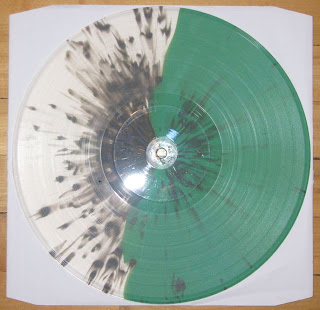 The outer sleeve is a silk screen cover that obviously can be smudged pretty easily. 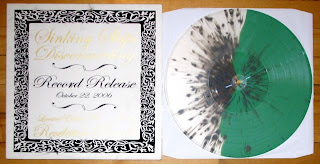 Each sleeve is hand numbered out of 75. I have either 54 or 64. If you have either one of the numbers, let me know so I can get it straight. 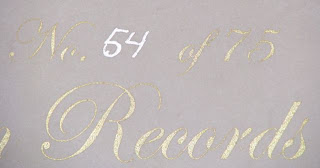 I'm not sure when the next post will be as the only things I have coming in the mail are 80's era thrash metal cassettes and the same pre-orders that you all have coming. Hey don't scoff, I picked up Slayer - Haunting The Chapel for $2. That's awesome.