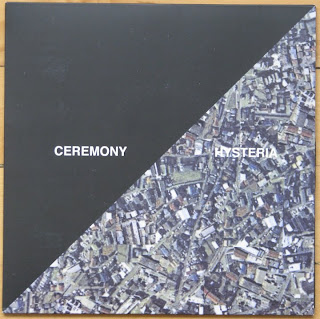 Ceremony continue down the growth and progression trail to develop into what I can only imagine is this decade's Wire. I for one, couldn't be more pleased.

As much as I dig the early stuff and will always love the fury of "Ruined" and "Violence, Violence", I feel something clicked when I heard "Sick" off Rohnert Park and especially the songs off the covers album. This clean, driving, post-punk/new wave/experimental sound they have going on is really working for me.

They seem one step ahead of everyone right now by standing out from the traditional hardcore pack. I can't wait to hear more off the full length album next month. First up though just to whet the appetite is the new "Hysteria" 7" released on their new big time indie label, Matador. 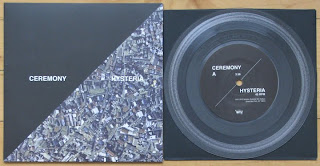 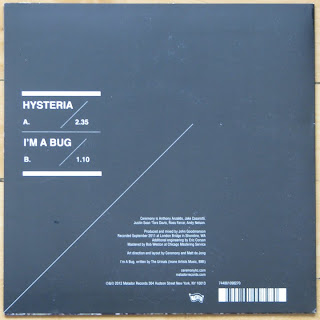 I really don't know how many were pressed in total, but word is that there were only 200 pressed on color with the rest on black. I was able to jump on the pre-orders through the Matador webstore pretty fast and put myself down for two. I wrote in the special instructions section that I was hoping to get one of each. One color, one black vinyl. 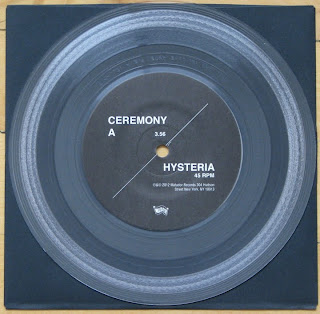 Well fast forward to when the mail came this week, I was surprised to see that I did end up with two copies - both on clear. Nice. Trade bait! I'm now accepting offers.

The b-side of the 7" is a Urinals cover, "I'm A Bug". I had to look them up to find out they were a early LA punk band. Alright then, good enough. This appropriately titled song about being a bug has the same vibe as the songs off Ceremony's Covers 12" from last year.
I think we can say that this new direction isn't changing anytime soon. Cool.