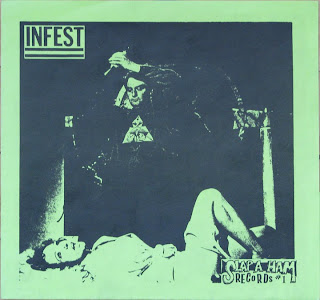 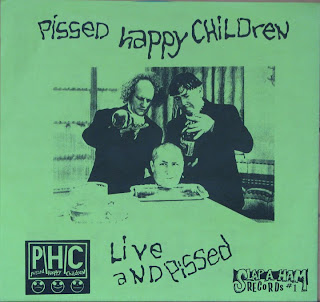 This is one record that I simply had to have; and will never play.

Sounds stupid huh? Well, there are a few reasons I wanted this record.
1. It's Infest. I love Infest.
2. Pissed Happy Children were pretty cool. Connell and Wood went on to Man Is The Bastard. I went through a serious MITB phase. West Coast Power Violence!
3. It's Slap A Ham #1. This was a prolific label back in the 90's for releasing international power violence and grind bands. Founded and run by Chris Dodge, bassist for Spazz, people used to go crazy for Slap a Ham releases. What can I say? It was the 90's.

The reason I will never play it?
Well, it's a flexi. It's a blue flexi mind you, but it's a flexi. These things were popular in the 1960's and were inserted in magazines and mailers. There is a fringe collector group out there that go crazy for these things. To each his own. 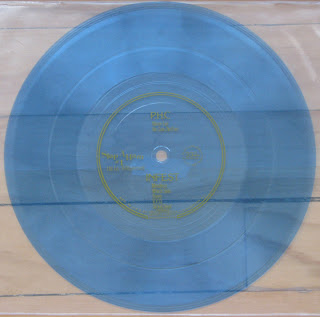 I mean, they tell you right on the record to put a coin on it so it doesn't slip.
So either I destroy the record trying to play it, or I wreck my needle. Kind of a no win situation. So when I got this years ago, I just filed it away, checked it off my want list and called it a day.

The Infest songs are five live ones recorded at Gilman back in 89. PHC contribute two songs. I wish I could tell you about the live recording quality, but like I said, I've never heard it. 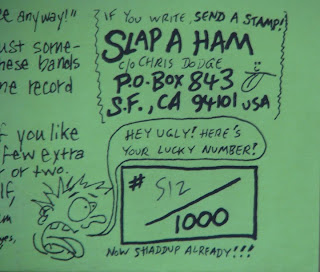 About a decade later this was re-released on a 7" as Slap A Ham 1.5. Three songs were added to the Infest set, and one to the PHC. While that would probably make it better to have as you could play it risk free and with more songs, it just isn't the same.
I mean really, what's cooler than a freaking 8" blue flexi disc?
Posted by Doug W at 4:40 PM