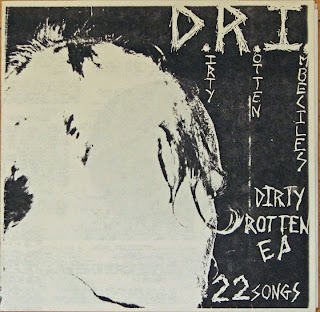 I have been hesitant to post this record for almost a year now. It's not because I don't love it, but because I'm not 100% sure of what I have.
If you have been reading this blog for a while, you know my downright phobia of bootlegs. The older, rarer, and more independent or DIY the record is, the better the chance it was bootlegged.
Case in point, I have no Misfits 7"s. It's not because I can't afford them, it's that I just can't stomach the idea of buying a high priced, very "well done" bootleg over the internet. Who can you trust on ebay? I guess I'd be ok buying them off Jerry Only and Danzig - or Jeff Lasich.
With that in mind, here is the DRI - Dirty Rotten ep 7".

Recorded in two days back in 1982, DRI attempted and somewhat successfully jammed 22 songs on a 33 1/3 speed seven inch record. These songs are pretty much classics. I don't think I have to describe "Who Am I?" or "I Don't Need Society" to anyone.
Unfortunately, fitting 18 minutes worth of music onto one record seriously reduced the overall sound quality. There is an almost under water or muddy sound to the recording and the volume is really low.
The original press of this was self released on their own label, Dirty Rotten Records. For years, the word was there were only 500 pressed. Prices on ebay reflected that big time. Now it is accepted that there were in fact 1000 pressed, and you can pick one up when they pop up for just under $200.
You have to be careful though. The dreaded bootlegs are out there.
For reference, the original record's matrix reads on side 1, "DRI-183-A" and on side 2, "DRI-183-B". The dead wax matrix numbers in combination with the written label style shown here is the only way to know you have an original press. 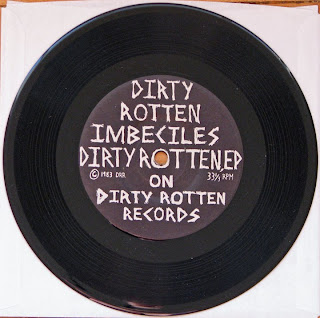 There is a European bootleg out there with black on white DRI "running man" logo labels. That is your bootleg. Also, the matrix numbers are scratched out. I only mention it because someone paid over $200 for one on ebay in 2007. That just sucks.
Now comes the hard part. The cover. 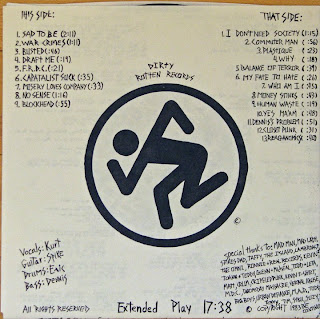 Well, the cover is a two sided photocopy. The accepted original cover is said to have very little or no white on the top and a large stripe or band of excess white paper on the right side. The bottom folds up to hide some lyrics and thank yous.
Going through the 26 or so accepted originals pictured on popsike, they all look different. The bottom folds are at slightly different spots. (They were hand assembled afterall) The contrast is radically different on each cover. There are different vertical photocopy lines on the front going through the "R" of Rotten EP.

From the accepted online description, I do not have an original cover. I have a thin line of white on the top and not enough on the side. I have avoided posting this record for that fact.
Plus, it would be an admission that I got taken. I paid close to top dollar, in cash, at an out of town record store where I could only recall the reference info for the vinyl. It's been bugging me for years.
I guess in the end though, - ITS A FUCKING PHOTOCOPY. All of them are! As long as I have the original vinyl with the crazy sound, I'm good.
The songs from the 7" were eventually re-released the next year as a 12" called the "Dirty Rotten lp". The songs were remixed and some say even the guitar parts were re-recorded (even more reason to own the original).
Roadrunner Records later combined the "Dirty Rotten LP" and the "Violent Pacification" ep for another repress. All are worth tracking down if you are a DRI fan or collector.
Beer City, who have been repressing DRI stuff for some time now, are re-releasing the 7" with the original mix and master. To tell you the truth, that kind of bugs me. The reason this record ended up sounding and looking as it did was from a combination of factors, at a time and place with a young struggling band that was organic, honest and innocent. To replicate it for widespread public consumption almost 30 years later just feels wrong, even if it is with the band's blessing.
But hey, I'm the loser who frets over how wide a white strip on a piece of paper is...
Posted by Doug W at 11:45 AM