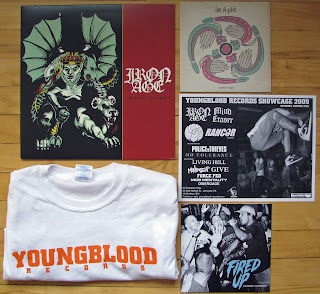 Not much to say on this one. I love special presses. I especially love when they press low numbers of limited vinyl especially for a record release/fest/Showcase.
I am also totally down with labels that make their leftovers available to the rest of us who can't make it half way around the globe to make it to a show.

Case in point, the Youngblood Records Showcase. This is the second time I have jumped at the Showcase vinyl package Sean has put up. I also bought the 10 year Anniversary press a couple years ago. I think its funny that one of the same records was offered at that time too!

First up, Iron Age - Constant Struggle. This press is on clear blue out of 150. This is my 5th version of this record. I think we can stop now. 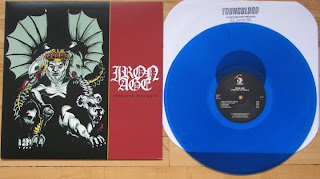 Next is the Lion of Judah - Number-ology 7". I actually already have one of these that I picked up during the big pre-order Sean did a while back with the Fired Up and Carry On records. Let me know if anyone needs this. It is on clear with a lot of black streaking and is out of 125. 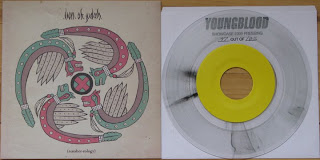 Lastly, we have the Fired Up - Doomed to Repeat 7" on gold out of 100. This was the main reason I jumped at this package offer. I already have the other two colors and wanted to finish this off without having to resort to ebay. Fired Up rule. Well, ruled. Just like the rest of you, I also have 8 copies of "When the Lights Go Out". 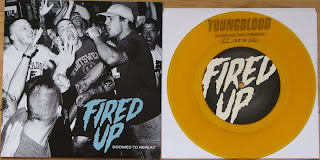 As part of the deal, I also got a very cool Youngblood Showcase t-shirt. It will come in handy tomorrow when I jet off with the family down to Mexico. Oh yeah, I'm not posting anything for the next couple weeks. Hola bitches! 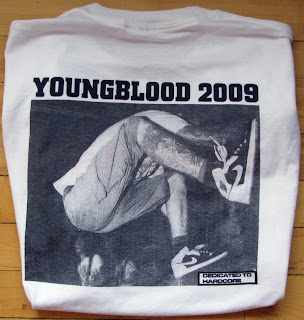 Maybe some of the 17 preorders and ebay wins will come in while I am gone and I will have some stuff to post. In the meantime, peace out.
Posted by Doug W at 4:35 PM