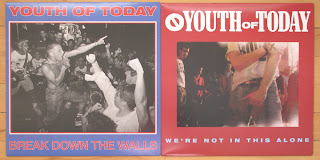 To tell you the truth, I'm not sure how I feel about this recent re-release of the two Youth of Today albums from Revelation. For anyone just getting into the band, record collecting or just can't afford the originals, this is a great idea and will make tons of Youth Of Today fans very happy. For those of us who busted our asses tracking down the originals, it's still cool. Just maybe not as much.
As you can see, they decided to re-release both albums with artwork as close as possible to the originals. We also know, both were not originally released on Revelation.
I might as well do these one at a time, so age before beauty and first up is Break Down The Walls. 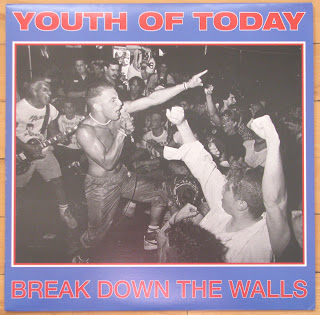 Now honestly, going for the original Wishingwell cover art looks great, but I would have preferred another direction. The first Revelation pressing of the album with the yellow and blue theme was just as iconic and awesome as this one in my opinion. If they would have released this with that artwork and the two tone color Rev labels, I would have been more stoked.

The other thing that makes me uneasy is the use of clear red vinyl. That is just too close to the original, iconic, legendary, search your whole life white whale, WW vinyl that thousands of hardcore kids would give their left nut for. I think I would have liked a different color completely. 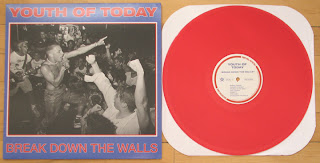 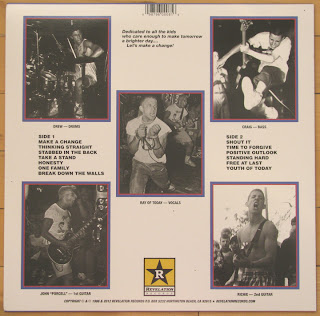 Revelation also used labels close to the original WW ones, making only the obvious name and logo changes of course. 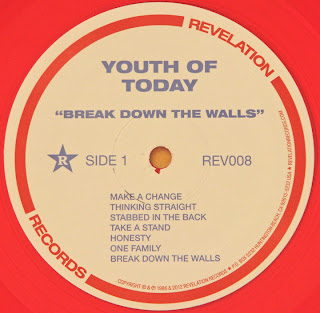 The insert is close to the same except for the band name in red and the removal of the Wishingwell logo (of course). Now it is a double sided 12"x12" insert instead of a one sided 12"x24" foldout. 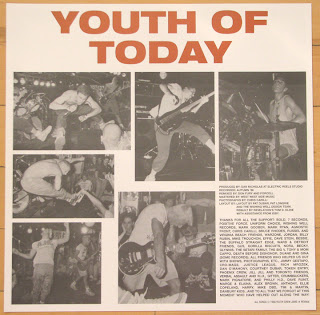 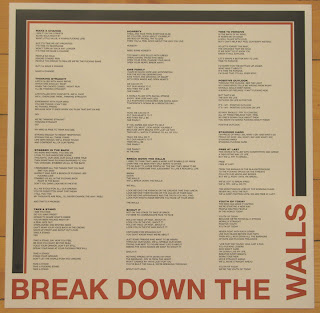 There are a lot of differences between the Revelation and Wishingwell versions so really, it's not like anyone is going to be confused by the two so I guess it's cool. It's not like I wasn't going to buy it!

Next up is one of my personal favorite albums of all time, We're Not In This Alone. 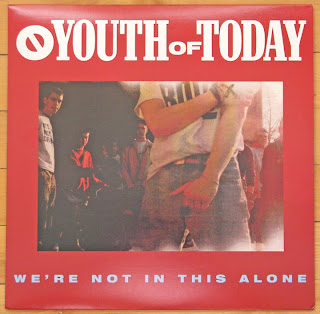 Of course this album was originally released on Caroline Records and had at least two original mixes. Go check out Dobek's site if you want more info on all that. The dude is crazy meticulous when it comes to that stuff.
This repress was on white vinyl which looks great and is the first time white was used for this particular record. I think it looks amazing. 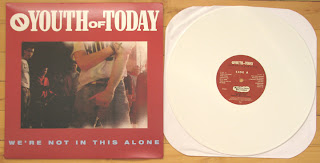 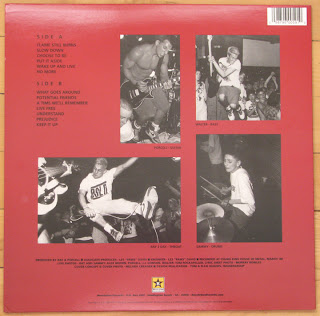 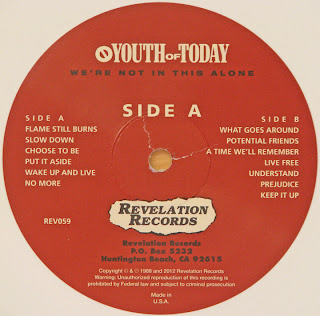 The insert is a lot closer to the original than Break Down the Walls is, but they do include color in the text this time around. 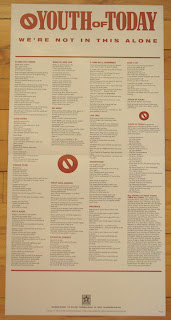 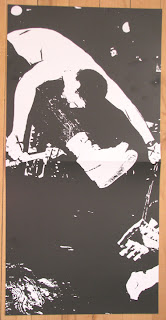 Just a note on the music, they use the 1997 Revelation remix on both these releases so it is still worth hunting down the Wishingwell and Caroline versions to get the original sound and vibe from these two crucial and necessary albums. In the end, there was no way I wasn't going to pick these up. It's what I do. If there was ever a band that deserves to have their stuff in print forever with new twists to keep it fresh and exciting, it's Youth Of Today.
Posted by Doug W at 8:59 PM