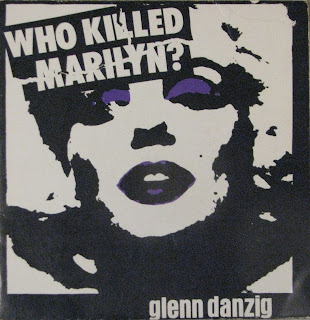 Well I wasn't quite able to make it in time for Halloween, but better late than never. I was able to take some of my record sale money and pick up this sweet first press of the Glenn Danzig - Who Killed Marilyn? 7".

For half of my punk rock life, I thought that Who Killed Marilyn was a Misfits song. It has definitely been appropriated by the band and was included on the Legacy of Brutality album and also that Misfits box set (which also included the b side Spook City USA). Can you believe that that coffin cd box set came out around 17 years ago? Holy crap, that's a long time ago. Feels like yesterday.
Anyway, there's nothing like owning the real thing and I grabbed this fairly cheap off ebay after Mike put up a post on Vinyl Noize for the Halloween 7".  Despite Mike's tacky and all too obvious efforts of posting a Misfits - Halloween 7" right before October 31, I was fortunate the seller was getting rid of this at the same time. Thanks bro, I never would have saw this if not for your hack writing. I kid! I kid!

I was particularly happy to grab a first press on black vinyl as most collectors scramble for the purple vinyl second press. I will take a first press for 1/3 of the cost of a 2nd press color any day.
All in all, not a bad deal. That brings the number of original Misfits 7" I own up to seven. One to go, and of course it is the toughest, most bootlegged one possible. Fucking Cough/Cool. Oh well. 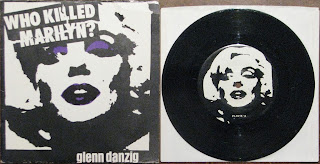 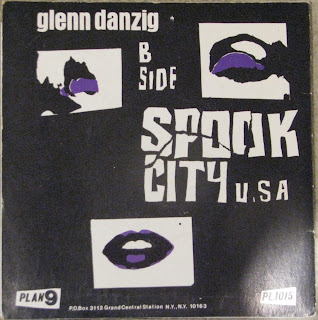