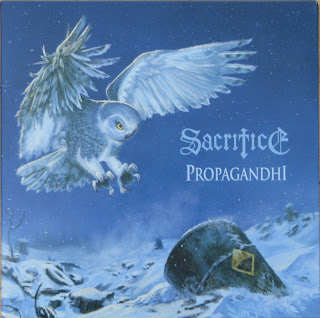 This record has to win the award for the biggest surprise of 2010 for me. I just didn't see it coming, I had no idea it was even being contemplated, and it has floored me with how absolutely amazing it is.

For a little background, I will just go through a short checklist of things I have loved in my 40+ years on this planet.
1. Rush. Rush's "Moving Pictures" album came out during my formative junior high school years when one decides how they will mold and identify themselves as it relates to popular culture. Let's just say that my decision to attach myself with Rush, hard rock and metal wasn't the best for making time with the ladies, but at least I accumulated a wealth of 3/4 length shirts for years to come.
2. Thrash metal. I made the big move from traditional hard rock and metal to thrash in 1985-86 and the Canadian band Sacrifice was along for the ride. Due to Canadian content rules for broadcasting, we would get the Sacrifice video for "Re-Animation" in regular rotation on the Much Music Power Hour. "Forward to Termination" rules. It got reissued. Go track it down. You have no excuses.
3. Propagandhi. Personally, I think the most consistent "punk" band alive. The spotlight may have waned on them after the Fat Wreck Chords split, but Propagandhi has kept rolling on. Their albums keep getting better and better and I can safely say I have enjoyed everything they have ever done. Supporting Caste is ridiculously good.
4. Corrosion of Conformity. From "Eye For An Eye" to "Technocracy", this band was in the upper echelon of the entire 80's Crossover movement. Period.
So, when I see a listing for a split 7" between Propagandhi (covering COC's Technocracy) and Sacrifice (covering Rush's Anthem), I nearly had a heart attack. I tracked it down online and bought it immediately.
Released on the Winnipeg based label War on Music, there were 1000 pressed total, all on black vinyl. 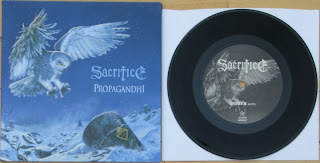 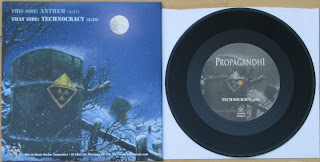 The record comes in a beautiful 7" gatefold cover with the cover artwork by Todd, the bass player in Propagandhi. Talent all over the place!
The artwork is a take on the original covers of the albums the songs come from, Technocracy and Fly By Night. 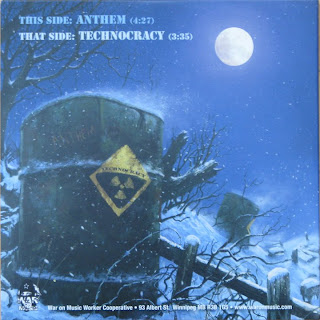 The record was just released on December 10 and as of today 10 days later, this sucker is sold out.
Oh and if there was any question, yeah - it's really good.
Posted by Doug W at 9:17 AM