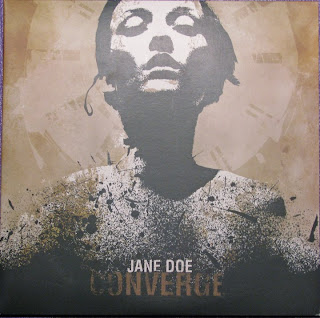 I have been wanting to do a post on this album for a long time.
I was always hesitant to do it because I was missing a big piece of the puzzle and I wanted to have pictures of all different color variations. Well, after a nice little cash deal with Aram for him to part with some of his gems, I can now happily post one of my favorite albums.

Converge - Jane Doe.
Damn, this record is near perfect. The aggression, speed, heaviness, and mood is unequaled. Everything Converge has done since draws comparisons back to Jane Doe. What I find cool is that metal dudes think it is metal, hardcore kids consider it hardcore or metal influenced hardcore (I refuse to call it metalcore). Everyone embraces it.

Of course, collectors also freak over it, as the repress Deathwish is planning is talked about on a regular basis for two years now over at the Vinyl Collective message board. The day that sucker goes up, plan on the internet crashing.
Seperate from the music, Jane Doe is considered the very best of Jake Bannon's artwork by many. What I find criminal is the underappreciated art work on the inside of the gatefold.

On a side note, prints of Jane Doe sell in the $400 range these days. Very hot commodity that even went through its own counterfeit scandal. A handful were illegally reproduced and sold on ebay with a relatively low "But It Now" price. Guess who got scammed? Yup. Of course it would be me. After a big stink over at the expressobeans message board, almost everyone got their money back. Well, except me.
On to the vinyl. The original press was on Equal Vision Records. Double album gatefold.There were four seperate color pressings each one pressed in pretty small numbers when considering to the demand.

Red Orange split. 150 pressed. This was sold by the band on tour. By far the hardest to come by and is the most expensive when it pops up. 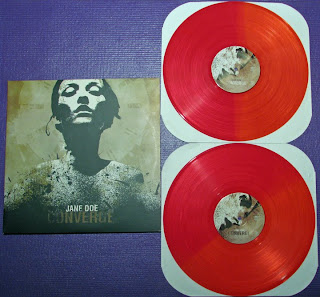 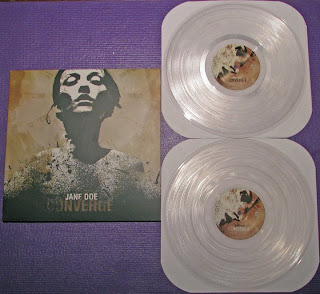 Brown/White mix. 550 pressed. While pressed in quantities almost double that of the clear, it regularly sells for more. It does look pretty awesome. 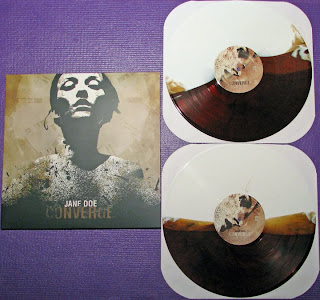 Black. The number floating out there is 2000 pressed. While it is the most common color, it still sells in the $85 - $100 range, showing the strength of the demand. 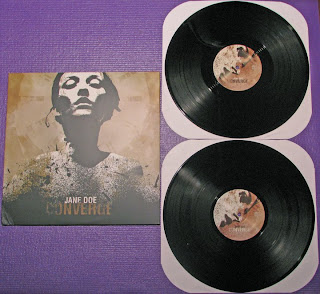 I realize there have been quite a few Converge posts lately, but you will have to bear with me for at least one more in the near future. Axe to Fall. The missing piece. I am happy.
Posted by Doug W at 8:41 AM