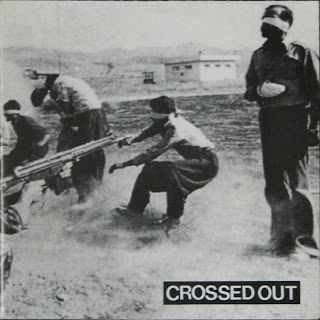 I am not in the best of moods. My home town of Calgary looks and feels like something out of the movie "30 Days of Night". Well except for vampires.
In one day we went from nice autumn weather to bone chilling deep winter. One day. They ever told us the hour it was coming.
Now we are a week into minus 30 degree Celsius weather and a foot of snow.
Oh yeah, it is also dark 16 hours of the day. The 8 hours of faint light we do get are while I am at work. Awesome.
Times like these make me hit the powerviolence, and there is no better band for that than Crossed Out. I would put Crossed Out and their first 7" along side the Infest - Machismo 7" and the Neanderthal 7" as the definitive sound of the first wave of west coast power violence.

Raw, strained gruff vocals, ridiculous fast blast beat verses and choruses contrasted with slow plodding heavy breaks - all wrapped up in around a minute or two. Sounds like heaven!
This 7" was released by Slap A Ham Records in 1991-92. Only one pressing of 1000 copies. All on black vinyl. 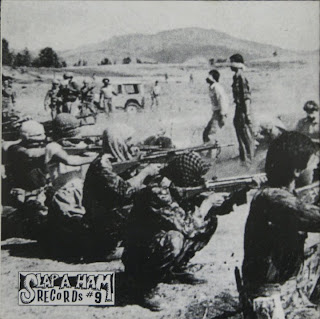 The value of these has fluctuated a lot over the years. When Chris Dodge closed down Slap A Ham, the value jumped quite a bit. Now you can grab one off ebay for around $50 to $60. 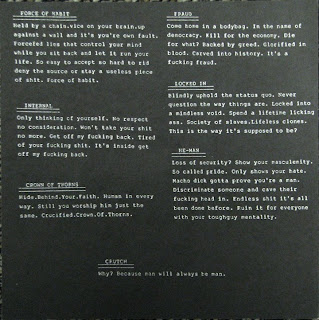 A discography was released in 1999 that compiled all of Crossed Out's releases. It was a cool record to grab so you wouldn't have to spend big money tracking down all their splits and comps. However, when Slap A Ham stopped, the value of that discography album jumped to the same as the rare stuff.

I guess people like their Crossed Out.
Posted by Doug W at 8:44 AM