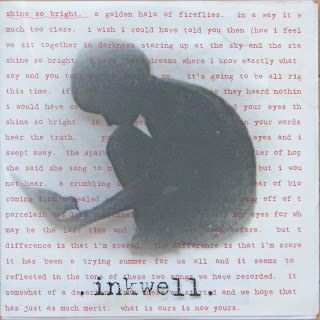 Today it is raining and 10 degrees Celsius. It is dark and miserable outside. Perfect weather for number 2 in my emo series!

Inkwell were not the biggest of names when it comes to the mid 90's emo scene. They weren't around for more than a couple of years, releasing just two 7"s and a split 7" with Hal al Shedad. Actually for the time, that was pretty close to wearing out your welcome. Any more releases and you would be labeled wannabe rock stars and probably get ostracized anyway.

Inkwell in my opinion hit the mother load with their second 7". The two songs, "Shine So Bright" and "Portrait" are pretty much the perfect representation of the sound and style of 90's emo/screamo. All the elements are here. Soft/loud dynamics, throat shredding screams, lyrics that read like poetry, etc. It literally doesn't get better than this. 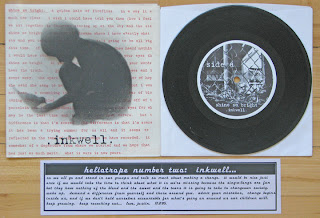 Shine So Bright was released on Heliotrope / Orion Quest Records, the second release from same label that released the original Converge Unloved and Weeded Out 7". In other words, Tre McCarthy put it out.
It's interesting that a small Atlanta, Georgia band stuck outside of the popular California, midwest and DC/Jersey/Philly scenes, that played 80% of their gigs at home, caught the eye and ear of a Massachusetts hardcore kid. I'm sure there is a story there. 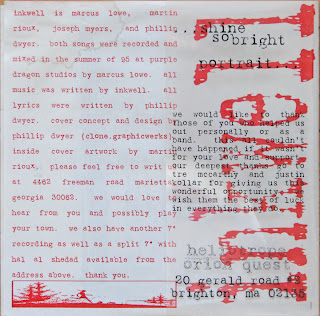 I don't know how many were pressed, but they were numbered. 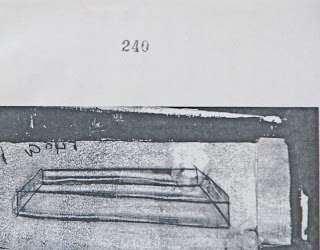 The packaging for this record is really awesome. A screened clear plastic foldover on top of the sleeve which has the lyrics. Looks great in person.
You can easily find this on ebay for $5. Well worth it. Truly one of the forgotten and under appreciated gems of the scene.
Posted by Doug W at 8:11 AM