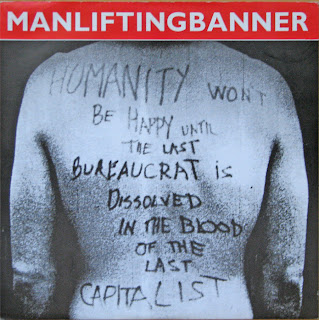 Given the state of the world economy and the fear that the next recession is just around the corner, I decided to pull out this oldie from the shelf and give it a spin.
If all our financial woes are caused by the free market economy, capitalism, exploitation and greed, let's blast some socialist hardcore to remind us of all the mistakes we have made - comrade!

Manliftingbanner - 10 Inches That Shook The World. 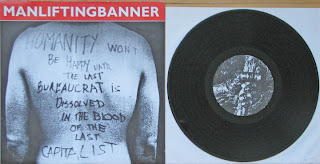 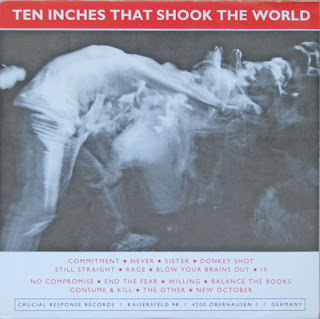 It seems almost silly now looking back on how I reacted or felt when I first heard this record. Musically, it is pretty much by the numbers hardcore . Youth crew type sound with lots of speed and not a hint of heavy or metal.
Lyrically and image-wise though, this was "controversial". Manliftingbanner was the first band I ever heard that expressed blatent socialist, Marxist and communist political ideologies.
It was very different from the Dead Kennedys, MDC or Crass "smash the state" anarchy lyrics that you almost expected from punk bands. On the other side of the spectrum, 80's hardcore always seemed to lean to the right if it got political with Agnostic Front, YDL or Murphy's Law.

This record was 100% Communist. That was pretty shocking to me. The Berlin Wall had only been down for a couple years, but it wasn't like we were embracing the old Soviet Union. I grew up being terrified of the Soviet Union. It took five Dutch kids to bring the ideology out of the tv set and into my music world. Ahhh, The Dutch.

Ten Inches That Shook The World was released on Crucial Response Records in 1992. I think it was back when it was a European only label and way before the internet or ebay. I wasn't going to find this record at the local record store. I just waited until my friend Geoff was ready to sell his copy. I waited a long time!

The layout has a lot going on not only with lyrics, but quotes from people such as Lenin and Trotsky to accompany the messages of the songs. 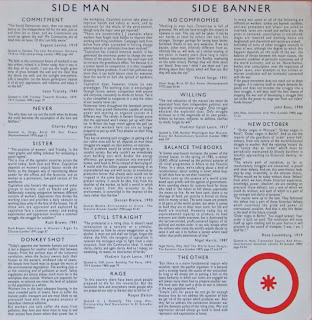 All in all, a pretty cool record that threw a lot of ideas at you including the positivity of straight edge, environmental issues, sexism, the exploitation of the weak and poor, along with radical violent communism. Heady stuff.