Chain of Strength - What Holds Us Apart (Confusion) 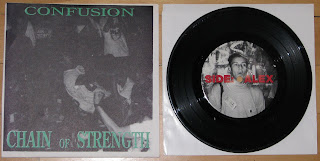 With the release of the second pressing of the Chain of Strength - What Holds Us Apart 7" on Foundation Records, the entire press of 1000 on black was given to Mindpower Records to sell and distribute.
New photocopied covers with the Mindpower logo were made (800 on yellow and 200 on blue) and new glossy inserts were printed with the Foundation logo. These were not the same inserts as the first Foundation press.
Also thrown into the mix were a number of "Confusion" sleeves. No one knows how many were made, but these versions became a big ticket item for Chain collectors. Based solely on numbers, it may be the rarest Chain record out there.
For a long while the "Confusion" version was essentially the same for any lucky person who had one, Foundation 2nd press black vinyl, the newer style Foundation insert, and a different cover using the picture that would end up on "The One Thing That Still Holds True" lp released a few years later.

Now things get, pardon the pun, confusing. A small number of "Confusion" records are out there that are quite a bit different than the one I just described.
First of all, the picture on the sleeve is way darker, almost to the point Curtis can't be seen. Second, there is a noticeable white band or stripe at the bottom fold and right side that is not there on the other Confusion sleeves. 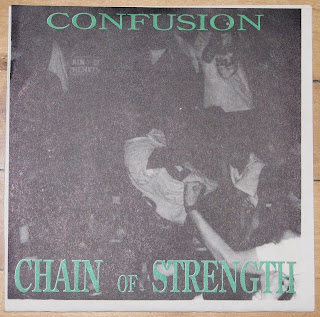 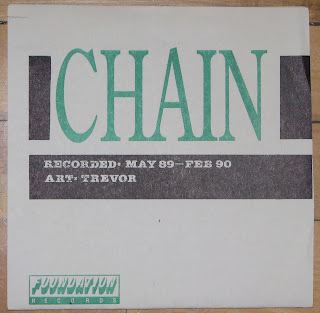 The insert is the same, the glossy Foundation one used for the Mindpower press. 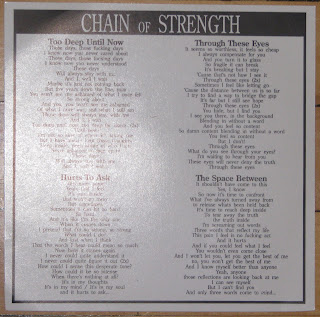 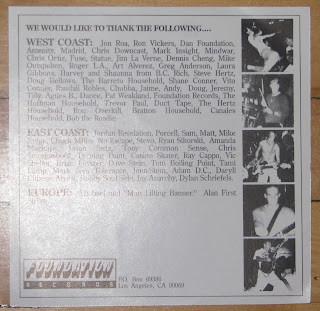 Here's the kicker though, the vinyl is the REJECT press vinyl used for the Chain Crew record. 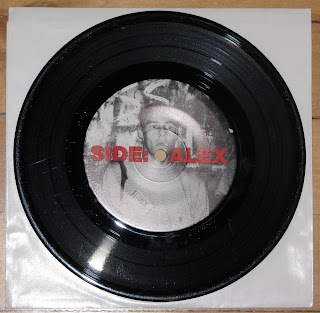 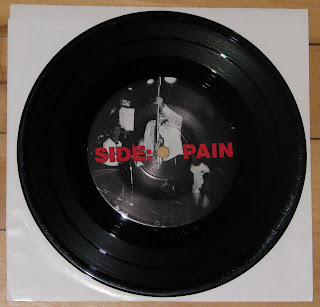 500 reject press records were pressed. Only 100 were used for the Chain Crew, the other 400 are out there and at least a few were used for this second "Confusion" version.
Checking the How's Your Edge trade list, a grand total of three people have one like this. Kyle Whitlow from Rivalry Records, Dobek Ohashi from Japan (cool blog - check it out), and me. I got mine from Troy Trujillo who's collection is also listed on the HYE board. According to popsike, one single copy has been sold on ebay. It was sold by Malcolm from Trash American Style.
So, is it a bootleg? Well, that is a hell of a bootleg if the vinyl you get is the prized reject press!
Who put it out? Someone with access to the reject press leads me to assume someone close to the band as they were each given 100.
I can't find the straight dope on this record online. I just put this together on my own, so if anyone knows the score on numbers or who put it out, please comment on it.
Whatever the case may be, as a Chain of Strength nerd, I am glad to have it. Whatever the hell it is!
Posted by Doug W at 7:52 AM