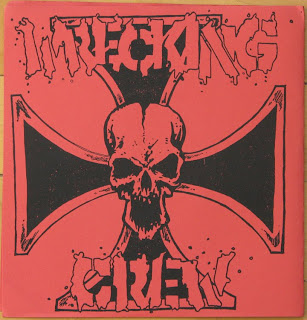 To tell you all the truth, I have very little coming in as far as rare or new records go. The stuff I am waiting on doesn't really warrant a post as I'm pretty sure either Mike or Marcus will be getting the same records and will have them up faster and post better stories than I could possibly do anyways. Plus, Spring is coming and I would rather be outside hanging out than taking pictures of records. Sorry. You don't know what Canadian winters are like!

All that leaves me with is posting on some of my collection I think people will like to see. Maybe. 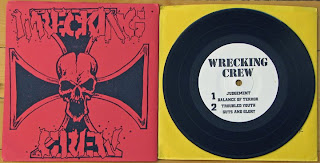 That brings us to the first Wrecking Crew 7" put out on Vortex Records.
Wrecking Crew seem to catch a lot of shit from the hardcore community, but for the life of me I can't figure out why.
Wrecking Crew were part of the second wave of Boston hardcore. The band had what I thought was a really cool Agnostic Front vibe.
Throw some metal in the sound, a long hair metal dude in the band, and a singer who at times is a dead ringer for Roger Miret, and they got tagged as an AF clone band. Shocker.
It's not like hardcore was ever that original, I'm not sure why they got the brunt of it.

This record has a few variations out there, mainly in cover color. As far as vinyl goes, there were black and green pressed. Black was out of 500. Green was a later press. The black vinyl had a grey color cover out of 300, and the rest on the more common red cover. 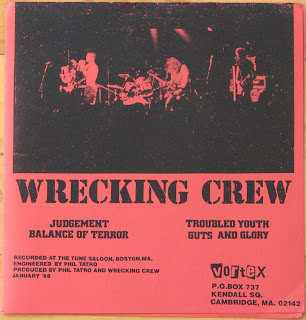 When I got this record in the mail I found something that wasn't in the description of the record when I bid on it. 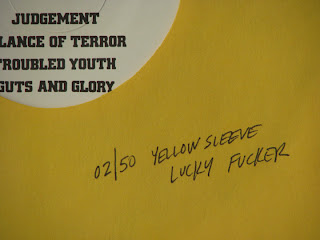 Apparently, there were 50 of these with yellow inner sleeves. I can't find anything on the internet about this at all. If anyone has any insight, please leave feedback. In the end, I don't think anyone is clamoring for this variation! I just thought it was interesting. 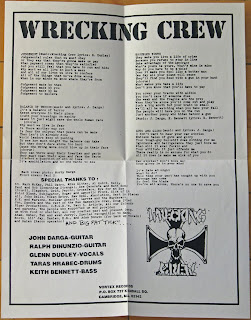 In the end, this is a pretty damn good record and is worth tracking down if you have a few extra bucks. I think time has been kind to them as their material was reissued on cd by Bridge Nine and their lp on Hawker, "Balance of Terror" has become quite a collectors item.
Posted by Doug W at 7:16 AM