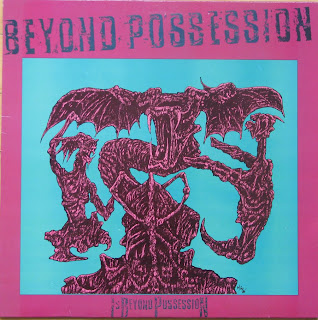 "This is a public service announcement, with guitars."

Well, not really. This isn't Joe Strummer, The Clash or even the "Combat Rock" album, but I do feel it is my duty to tell everyone about one of the greatest crossover albums, no fuck that, the greatest albums of all time.

"Beyond Possession...Is Beyond Possession" is a masterpiece in heavy, fast, brutal, start and stop crossover hardcore thrash metal.
Many would say that this is just a straight up thrash metal album but there is too much skate punk sensibilities thrown in to be just that. 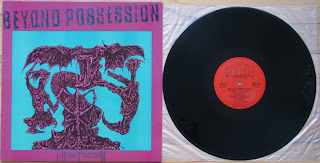 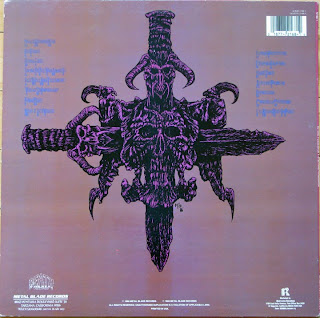 I have written about Beyond Possession before, covering their amazing Tell Tale Heart 7". This was their next and final release as an active band.

This was released on the very cool Death Records imprint of Metal Blade Records out of L.A. Death Records released some really important crossover records by C.O.C. and D.R.I. among others. Check out the Death Records comp sometime if you can find it. 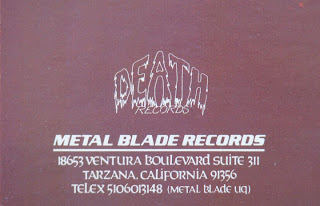 Vinyl wise, there isn't much to say. It was just released on black vinyl. It is a hard enough record to find on its own, there really doesn't need to be any bells and whistles with multiple colors or pressings. One bonus if you do find a copy is a lyric sheet. I know a lot of dudes who didn't get one the first time around back in 1986. Nothing to write home about, but the lyrics do help as Ron Hadley could seriously fire out the lines. 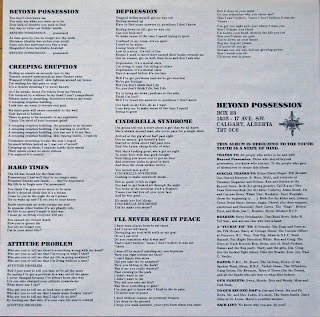 There are a couple websites out there where you can download the album and I would recommend that you do. I would normally not promote that kind of thing but this sucker is so long out of print and was originally only available on lp and cassette. I don't think Brian Slagel will mind.
Posted by Doug W at 8:37 AM