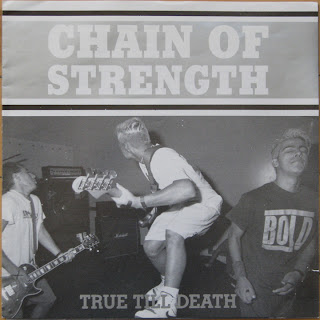 Well, this is it. The last great, unobtainable, impossible record from my want list is now mine. I still can't believe it.
Oh sure, there are still some records on that list that I would kill for, but nothing comes close to this - Chain of Strength "True Till Death" on clear vinyl with silver sleeve.

We are actually heading into literature and document collecting as the collectibility of this record is in the sleeve, not the vinyl.

The story is fairly well known, 500 copies of clear vinyl were pressed. 300 were issued in the regular green color sleeves and given to the band for tour. The remaining 200 copies were given a special silver print sleeve and were never really sold. According to the Revelation pressing website, almost all of them are still at the Revelation offices. A few of the silver sleeves made it out and were sold through mail order, but I don't think anyone knows how many.
By the rarity and price these go for, "a few" sounds about right. 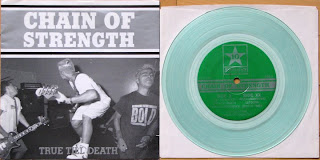 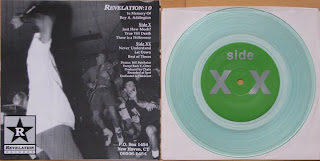 By no means are clear vinyl copies with the green cover cheap or in great supply. Going rate is near $400. Clear with silver sleeve, well, let's just say in the very remote off chance you get the opportunity to get one, it's more. A lot more. I turned down a deal last year for one where the private bidding topped $900. That was when I backed out. 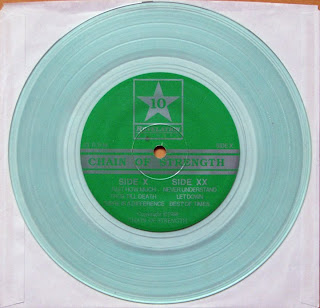 As I was saying we are into "The Ninth Gate" level of rarity and demand for essentially printed paper. (Hell of a movie, by the way) But why not? Book collectors do the same thing. Sometimes, it isn't about the music. You know?

Here are a bunch of shots of the cover and foldout with the silver detail used instead of the green. 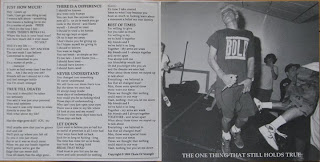 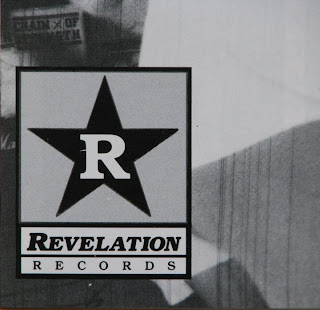 This stuff keeps me young. I live for this - one record at a time! Next up, I need a Floorpunch on gold! Any sellers?
Posted by Doug W at 8:13 AM