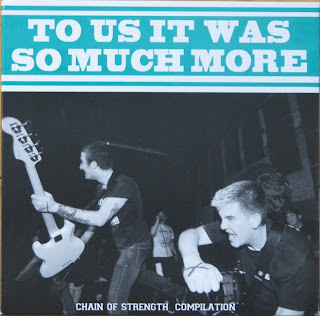 If anyone has been a regular reader of this blog, you might have figured out I like Chain of Strength.
A lot.
You might have also figured out I like to collect really expensive Chain records, shirts and all things Chain Of Strength.
So when I heard about the pre-order for the 1124 Records Chain of Strength comp called "To Us It Was So Much More", I jumped at it. I was kind of scared I had missed out on the clear version but as we will see, no worries were necessary.

1124 Records offered a 3 pack package where you would get all three versions of the record which was done in the exact color scheme as the original "True Till Death" 7". I have to say, that was a stroke of genius!

First up, clear vinyl with silver sleeve. This was the most limited at 100 pressed. The discography page says 102, so take your pick. 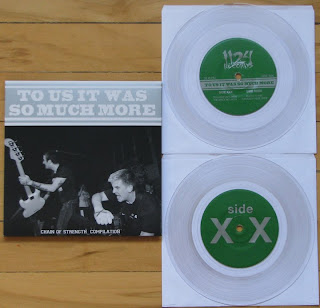 I swear to god, I am going to start thinking I am a big deal around these parts as somehow I scored #88! First the React! Showcase box set and now this. If you had anything to do with this, thanks Scott!

Next up is green vinyl with green sleeve. 325 were pressed. I have a lot of black swirled in with one of my green records, but it isn't one of the 4 transition press. 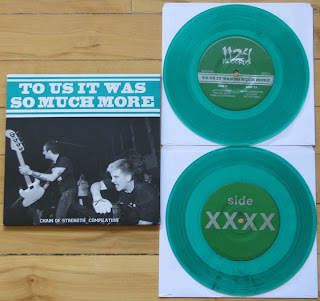 Lastly, black vinyl with green sleeve. 610 pressed. If there is any justice in the world, I hope these sell out completely. Scott, the label and the bands deserve it. 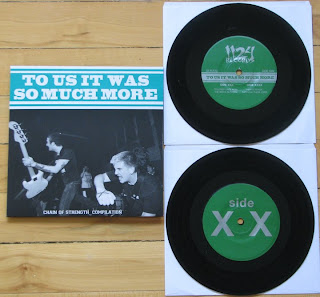 All three versions came with the same fold out two sided insert that is very well done. 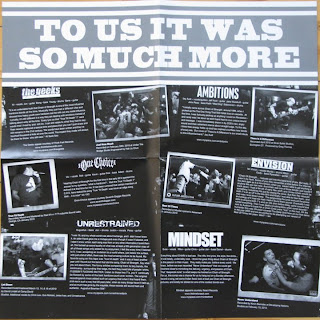 If there is one thing that this comp did for me was show how good the songs are. With all these different styles of bands, the one thing that shines through are the quality of the songs.
From Reign Supreme to Mindset to The Geeks to Ambitions, all the bands do a great job at bringing the songs to life. 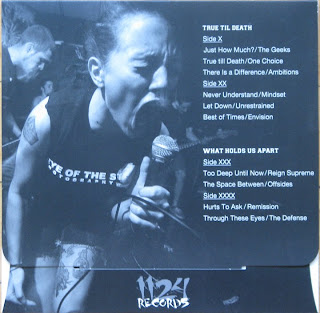 Hey don't take my word for it, check out my 1 1/2 year old daughter grabbing her flashlight and grooving to One Choice's version of True Till Death. Epic!