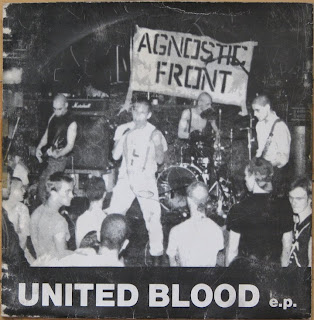 I always wanted to hold off on posting on this, one of my favorite 7"s, until I had the real deal. Luckily, I can do that now.
This is the second of the three records I bought off Sammy Seigler, drummer from YOT and a dozen other NYHC 80's bands.

I already had the 1989 kind of legit repress of United Blood that was done for Roger Miret's benefit show released by No Justice, Just Us Legal Defence Fund. I was pretty happy with it. It was even autographed by Roger, Vinnie Stigma, and Will Shepler. I figured that would be good enough.
Of course, I also bought the reissue of United Blood that Bridge Nine just did as well. It is a really well put together package that made me want the original even more.

Happy to say I finally got one. 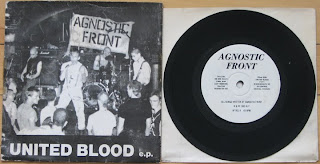 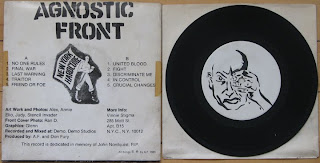 The cover has seen some miles (that is 27 year old scotch tape!), but the vinyl is surprisingly clean with no scratches, pops or hiss. That's what I like! 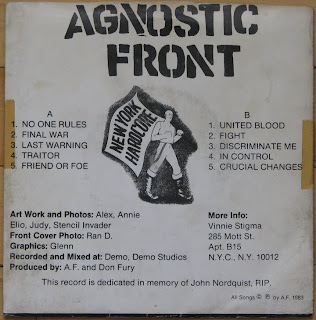 The record was self released in 1983 on their own AF Records. There were a total of 1000 pressed. 400 have the skin head B side label, while the remaining 600 have blank white labels. Word is that these were two seperate presses that the pressing plant screwed up on the second press and the skinhead labels ended up on a disco record. Actually, that sounds pretty cool. 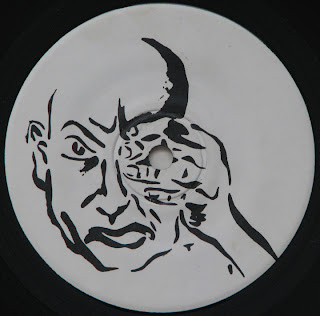 For those who care, there are bootlegs of this out there with blank black labels and a large center hole. The bootleg matrix on the A side says "AF-001-A" and "BIOBH". Some ebay scum sell these as originals and have been stealing up to $300 from unsuspecting victims. Just looking out for you all.

A lot of the original copies did not come with inserts, luckily, this one did. 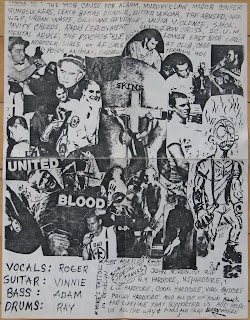 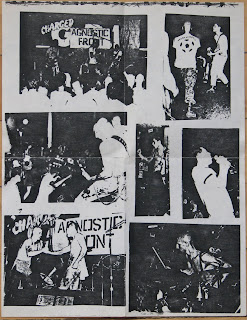 Now that I have five copies of this, plus another on the Last Warning lp, I think I'm good with this release. Damn, is it ever awesome though!
Posted by Doug W at 9:36 AM