Minor Threat - Out of Step

It's amazing that a person will willingly collect pieces of 12"x12" cardboard with different color stripes and numbers on them. Sometimes, those pieces of cardboard don't even have stripes on them at all! It's the little things in life... 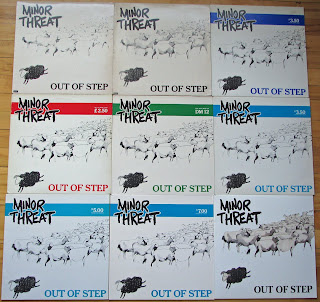 A few years ago, I thought it would be a good idea to collect all the Minor Threat - Out of Step variations through the years. It's right there as my favorite album and "Betray" is still my favorite MT song. Come on, let's walk through the years together!
First press. No stripe, No price, all black back cover. Kick ass sheep label. Half insert with no picture of the band. According to the ThreatBase website, 3500 pressed.
By far the toughest and most expensive to get. 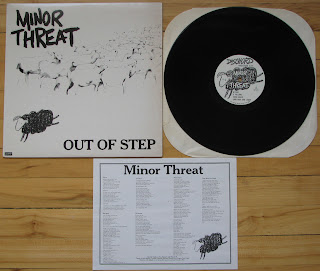 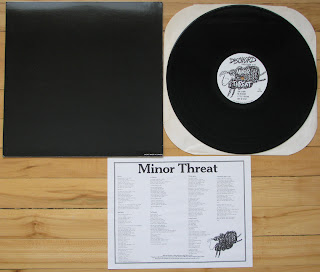 Second press. No stripe, grey back cover with band member head shots. Full insert that would be the same for every subsequent pressing. They also changed up the label. Grey text on yellow background. 5000 pressed.
A favorite to be sure just because of how different the back cover is from the subsequent pressings. This is the one that they used as the template for the 2009 repress. Thank god there are differences to tell the two apart. We will get to that later. 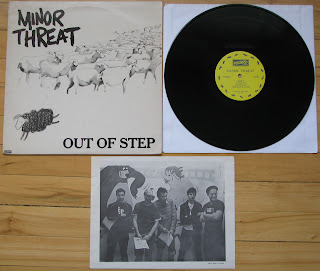 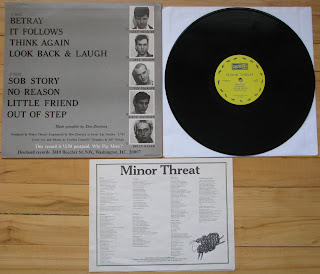 Next up, the beginning of the stripes. Third press. The first one is dark blue with a $ 3.50 price. Those were the days huh? Dischord rules. 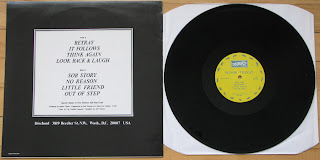 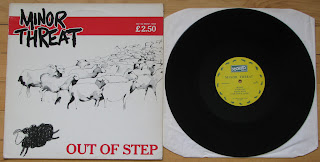 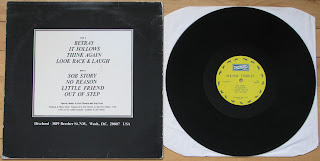 Now my person favorite. The German pressing! Third press. Green stripe with a price of 12 Deutschmarks. I have no idea how much that amount is. 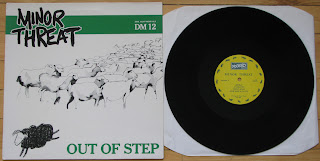 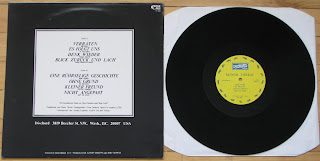 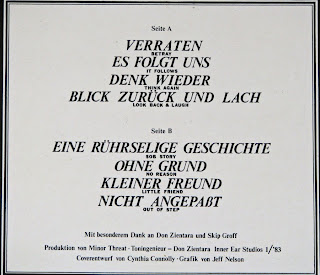 Fourth press. The next color stripe is the very familiar blue/green that they would use for a while. Still $3.50. 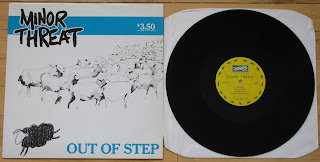 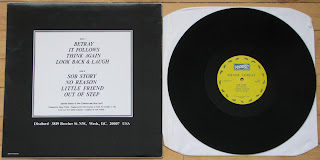 Next up, fifth press. Inflation takes hold and we get bumped to a whole $5.00. What a rip off! The labels changed a bit with a very striking green used on the yellow background.

For years and years they went to the next jump in price - $7.00. Same blue/green stripe, labels and insert.
I passed on it for a long time until last year Dischord started repressing all their back catalog. Seventh press. For the first time they pressed on color vinyl. The color is an off-white/cream color.

This year Dischord started remastering and re-releasing all their classic back catalog. They decided to go for a second press reproduction with Out of Step. Luckily, there are lots of ways to tell the two apart. The Dischord logo on the front cover in the bottom left is missing, the font size and layout is also different on the back. The Brian Baker picture is different too. There is also a repress sticker on the shrink wrap which is a dead give away. 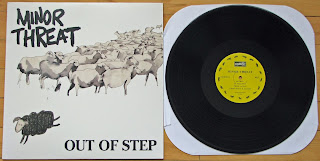 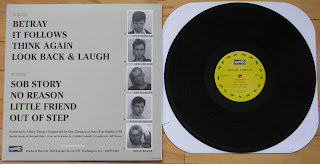 Also, the insert for the first time folds in at the middle instead of out. 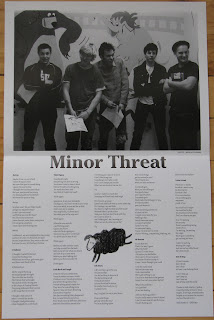 I guess some day I might pick up the $7.00 blue green stripe 6th press. Just to keep consistent. Luckily, I don't have too many more big collections of the same record like this. But hey, who can resist colored stripes?
Posted by Doug W at 4:28 PM