Judge - Bringin' It Down 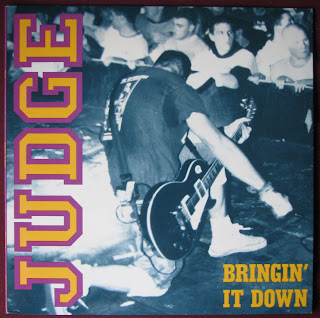 In Judge's relatively short existence as a band, the impact they made on the hardcore scene is undeniable. The impact wasn't just the music they created or the hardline straight edge stance they took (and the repercussions from it).
No. As time has shown some 20 years later, Judge has also had a monsterous impact on the record collecting world as well.
Just look at the releases that are at the top of every hardcore collector's want list:
Chung King Can Suck It;
NY Crew on Schism (all three variations);
NY Crew on blue vinyl from the Rev repress;
The Storm on gold;
and this little gem right here, Bringin It Down on green. 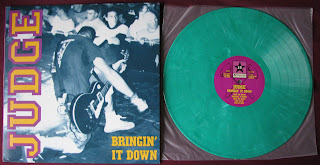 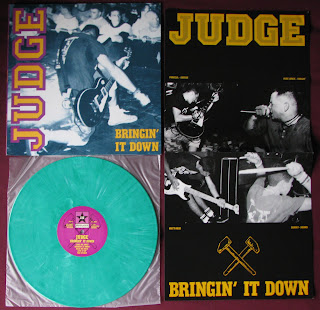 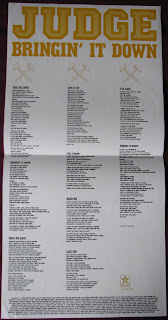 There were a total of 712 pressed on green, but it might as well be 112. They just don't pop up too often on ebay or the trade boards and when they do they are going for close to $300 these days. That is crazy money for a record that really isn't that rare when looking at the numbers pressed. It can only mean that demand is higher than ever and those that have it are holding on tight. Me included!

I mean hell, there were thousands of black vinyl copies pressed and those go for decent money ($35-$40) on ebay now as well. Purple labels, red labels, back to purple or maroon. Everyone wants a piece and there doesn't seem to be enough to go around. 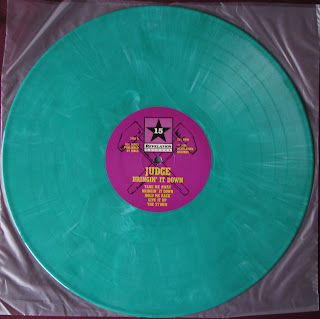 I can totally understand the demand because this record is killer. Hell, everyone knows that. You don't need me for a review of a record released in 1989!
For what's it's worth, I will say that "Hear Me" and "I've Lost" are amazing jams for changing diapers on a wiggly 8 month old.
Posted by Doug W at 8:07 AM