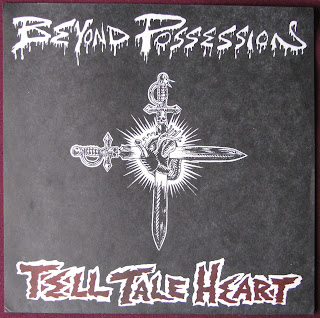 This one is for Citrus, Al and Ross. Looking forward to my final daze.
Growing up in Calgary, Canada in the 1980's, one can easily get an inferiority complex. We didn't have much going for us back then. No one famous comes from here. No popular Calgary bands had ever made it at that point, not even nationally where our government force feeds Canadian artists down our throats (30% minimum Canadian content on radio and tv ).
Everything cool came from somewhere else. Period.

That is why to this day I still have a soft spot for Beyond Possession.

They were the first hardcore punk band I had ever seen live, and they were local!
1985. I was 15 years old. The Westward Club downtown. Local music scene legend Wes Hegg working the door. Ninth Configuration opening. BP hits the stage and singer Ron Hadley had his shirt off 5 seconds into the first song, tattoos everywhere. Dude scared the crap out of me. I loved it.
That show literally changed my life. I went from 18,000 seat metal concerts to all ages shows, from metal to hardcore.

Anyways, getting back to the inferiority thing, Beyond Possession were ours and it actually looked like they were going somewhere. Now we were going somewhere too.
First, they started popping up in Thrasher Magazine as they embraced, and were embraced by, the underground skate culture. There were no X-Games or ESPN coverage back then! Next, you would read how James Hetfield saw them and even bought a shirt. Then they were signed to Death/Metal Blade Records! I mean damn, they ended up on a comp with D.R.I and Dr. Know! Then the pinnacle of the "...Is Beyond Possession" album. You have to understand, we cared about these achievements. It was more than just liking the band, It was kind of liking ourselves.

I see yourslf asking, "Where is all this leading?" Well my friends, I present the Tell Tale Heart 7". This was their first record and definitely their "punkiest", everything after this got pretty metal. "Skater's Life" is still revered around these parts as one of the best skate rock songs ever written.
The first press was on Rooter Records. You can tell the first press from the red and black lettering in the title and pictures of the band on the back. It also has different labels and a two sided lyric sheet. 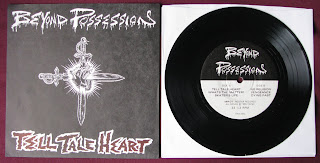 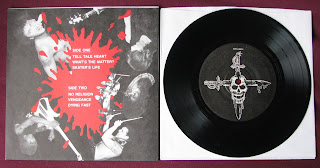 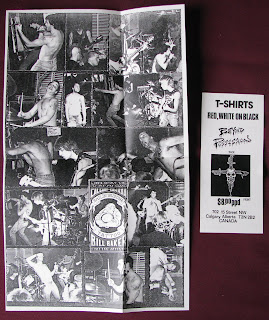 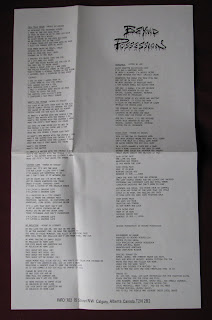 The second press was on Fango Records. It had black and white lettering on the front and a white back cover. It also dropped one song, "Dying Fast". The lyric sheet was scaled down too. 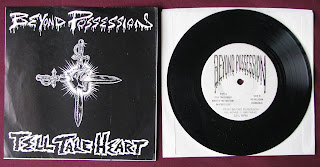 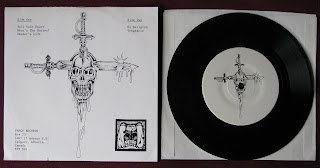 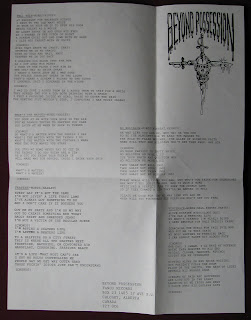 Of course you could find the second press a lot easier, but the first press is the one for my money.
Both presses were only available on black vinyl. I can't tell you how many were pressed, but if you ever run across one, pick it up! There was also a discography cd that came out on Calgary label Melodiya Records which is about as hard to find as the records.
Posted by Doug W at 12:12 PM