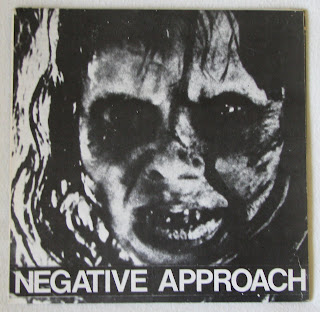 Ah, the record that had eluded me for a decade. The Negative Approach 7" on Touch and Go. 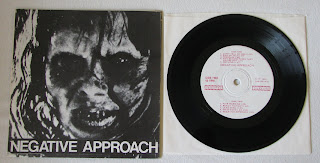 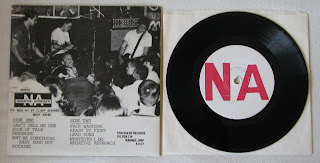 It seemed to take a very long time for me to get this. I had their "Tied Down" album for quite some time but of course this one is a little older, scarcer and in my opinion a whole lot better.
Anyway when it came to tracking this record down, if it wasn't beat to hell, it was an ebay feeding frenzy that got too rich for my blood. Luckily sometime last summer, or maybe it was two summers ago, Paul Colucci from Between the Wars posted on the boards that he was selling his entire record collection. You have to jump at those chances when they come.
I bought around 50 rare records off him including this one. The total cost was insane and the shipping and duty charges I had to pay were more than I usually spend on records in a month, but I figured it was better than dicking around one record at a time.
I hid all evidence of the transaction from my wife and waited impatiently for the packages to arrive. When they did, out of all the choices I had on what to play first, Negative Approach was the one.
This one is a second press out of 1000. You can tell from the red print on the labels the pressing. First press has black printing. 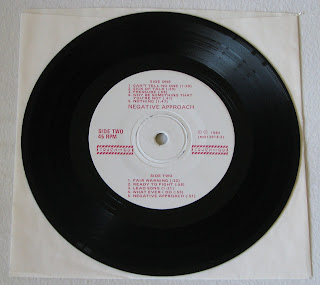 If there is one thing I have seen with early hardcore records it is the rarity of an insert in great shape. I got lucky with this one. 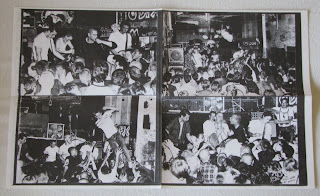 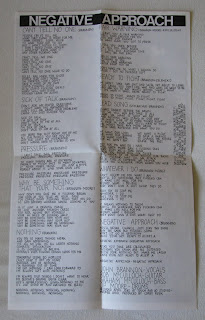 A lot of serious collectors dig for the colored face covers as only a handful were colored originally. To me that just opens the door for shady characters to color any copy and claim it is original. Hell, my kid can color with green crayons and stay in the lines and everything! Time to get paid!
Posted by Doug W at 8:16 AM